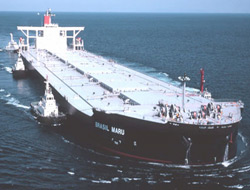 The Mitsui O.S.K. Lines, Ltd. operated iron ore carrier Brasil Maru has been selected as the Ship of the Year for 2007 by The Japan Society of Naval Architects and Ocean Engineers.

The Mitsui O.S.K. Lines, Ltd. operated iron ore carrier Brasil Maru has been selected as the Ship of the Year for 2007 by The Japan Society of Naval Architects and Ocean Engineers.

The selection committee noted that the Brasil Maru is a pioneering vessel in reducing iron ore transport cost which will have a great effect on steel production. Adoption of ultrasonic impact treatment (UIT) welding technologies increases resistance to metal fatigue.

Brasil Maru reflects the needs of the times, offering high efficiency thanks to its large size. With a deadweight tonnage of 320,000 tons which is one of the world's largest, it is the optimal size to transport iron ore produced in Brazil.

MOL, with its customer (Nippon Steel Corporation), the shipyard (Mitsui Engineering & Shipbuilding Co., Ltd.), and the shipowner (Tamou Line S.A.) spent a year and a half studying and designing the vessel.

It was built in Japan, where such large-scale iron ore carriers had never been constructed, and is ideally suited to meet increasing demand for transport of iron ore from Brazil to Japan via shuttle service.

Starting with the Brasil Maru, more than 50 iron ore carriers in the 300,000 dwt class have been ordered around the world. The Brasil Maru is truly the forerunner of future iron ore transport.

The vessel's design relied on the most advanced computer simulation to optimize environmental protection and safe operation. It offers high-performance course stability that takes water flow into account, and excellent maneuverability.

In addition, UIT, a revolutionary method of treating steel surfaces, was used to more than double resistance to metal fatigue in the welded parts.

The Brasil Maru is the third generation ship to bear the name, succeeding the first-generation cargo and passenger liner Brasil Maru (built in 1939) and the second-generation cargo and passenger liner Brazil Maru (built in 1954). This reflects MOL's long history serving the Japan-South America route. The new third-generation ship carries the "Brasil Maru" name in Portuguese as an iron ore carrier directly linking Japan and Brazil, reflecting hopes for the continued growth of friendship between the two nations. 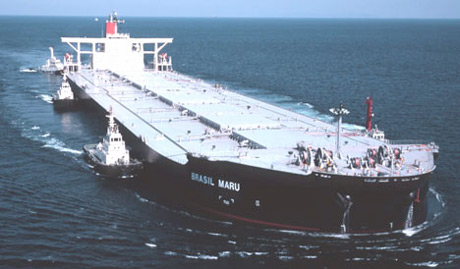 This news is a total 1322 time has been read