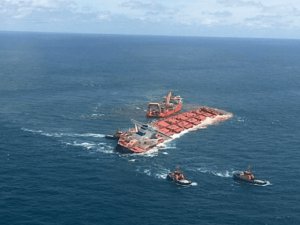 Salvors in Brazil have refloated the stricken Stellar Banner more than three months after the VLOC ran aground.

The refloating comes following the removal of approximately 145,000 metric tons of iron ore from the vessel’s holds. The removal helped to right the ship by 12 degrees from its peak list, exposing part of the deck that was previously submerged.

The Stellar Banner has now been towed to deeper waters about 60 miles from the coast of Maranhão where inspections are expected to take place.

With capacity to transport up to 300,000 tonnes of iron ore, the Stellar Banner is categorized as a Very Large Ore Carrier, the largest type of dry bulk ships in the world. The vessel is owned and operated by South Korea’s Polaris shipping and is chartered to Brazilian mining giant Vale to transport iron ore from Brazil to China.

Soon after the grounding, Vale reported that, based on reports from Polaris Shipping, the vessel had suffered damage to its bow in the shipping channel as it departed the port and grounded to prevent it from sinking. Experts later determined from preliminary reports that the impacted portion of the Stellar Banner was of 25 meters in length near the starboard bow.

The salvage operation was led by the soon-to-be-defunct Dutch salvage firm Ardent Global with help from SMIT Salvage and the Brazilian Navy.

This news is a total 359 time has been read
Tags: stellar banner