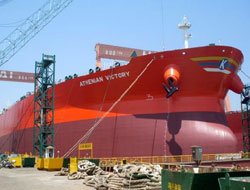 The naming ceremony for the very large crude oil carrier "Athenian Victory" took place today on the world's largest shipyard Hyundai Heavy Industries in Ulsan / Korea. The delivery to its owner, the Greek shipping company Athenian Sea Carriers, is scheduled for the 27th of August. The vessel with the hull number 2002 is the first of a series of four 318,000-dwt VLCC tankers. The classification was entrusted to Germanischer Lloyd (GL).For GL, this is the largest current tanker project. The classification process followed the new project management format introduced by GL whereby the interaction on technical matters between the shipyard, the ship owner and GL is centralized. Both the plan approval process and the steel cutting were already completed in 2008. "For GL, the work on this giant took off in summer 2006 when Athenian Sea Carriers had ordered the four sister vessels and entrusted GL with the newbuilding classification. Now, the first vessel is ready for delivery, big and strong, made of the highest quality steel and built according to the Common Structural Rules for oil tankers", said Torsten Schramm, GL's Chief Operating Officer at the naming ceremony in Ulsan.

The "Athenian Victory" has a length of 333 m, a breadth of 60 m and a draft of 22.6 m. It is a single screw VLCC oil tanker, with 17 cargo oil tanks including two slop tanks and twelve segregated water ballast tanks. The main engine has 29,000 kw. The double hull oil tanker has been designed and assessed according to North Atlantic conditions. The hull has been designed to IACS Common Structural Rules for Tanker (CSR). Compliance with requirements of MARPOL Annex IV (Sewage) and Annex VI (Air Pollution) is ensured. Separate Normal and Low-Sulphur Heavy Fuel Systems (double storage tanks, settling tanks and service tanks) allow for SOx emissions management. Under the flag of Marshall Islands it will take up its first voyage to Singapore. Its environmental properties will be documented in the "Environmental Passport". The voluntary class notation issued by Germanischer Lloyd is a certified documentation of mandatory and voluntary environmental characteristics of the vessel. This will include aspects such as engine and incinerator emissions, vapour emission control systems, refrigeration systems, fire-fighting systems, pollution by oil and noxious liquid substances, pollution by sewage and garbage, ballast water management and anti-fouling systems. The "Athenian Victory" complies with the regulations for fuel oil tank protection as required by MARPOL Annex I Reg. 12 A, although it is not mandatory. About Germanischer Lloyd Germanischer Lloyd (GL) is a ship classification society and an international technical assurance and consulting company for the energy sector.

The company employs more than 6,900 engineers, surveyors, experts and administrative staff in 80 countries. The global network consists of more than 200 locations around the globe. GL is dedicated to ensuring the safety of life and property at sea, and the prevention of pollution of the marine environment. As an independent third party, GL is developing state of the art rules, procedures and guidance for ship owner, ship yards and the maritime supply industry in order to offer relevant answers in times of economic challenges and tight regulatory regimes. GL classes container ships, tankers, bulk carriers, multipurpose vessels, high-speed ferries and cruise ships as well as superyachts and sport boats. GL's fleet in service amounts to 81 million gross tons. More than 6,860 ships are currently surveyed on a regular basis by GL. Apart from classification GL is an international technical assurance and consulting company for the worldwide energy industries. GL provides assurance, inspection, and consulting as well as project management on a worldwide scale. The focus of its worldwide services is along the entire life cycle oil and gas - upstream, midstream, and downstream, renewables and energy installations onshore and offshore. This includes safety, integrity, reliability and performance management. GL's, headquartered in Hamburg, Germany, has a dedicated growth strategy, both organically and by acquisition. In April 2009, Noble Denton, a premier provider of life cycle marine and offshore engineering services, has joined GL and reinforced its offshore expertise. Wind consultancy Garrad Hassan (GH) joined forces with GL in August 2009 to form a technical assurance and consulting company for renewable energy. www.gl-group.com About Athenian Sea Carriers Athenian Sea Carriers Ltd. Is a Tanker Management Company with extensive experience within the field o Crude Oil and oil products transport. The company has achieved a leading position amongst tanker management companies due to its capability to provide safe and environmentally friendly oil transportation combining client satisfaction and protection of public interests.

This news is a total 5752 time has been read