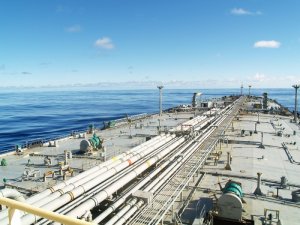 Gasoil is usually shipped on medium and long-range sized vessels carrying up to 700,000 barrels. It is unusual for the industrial and motor fuel to be shipped in VLCCs able to carry about 2.2 million barrels of the oil product.

Shipping data in Thomson Reuters Eikon shows that the brand-new, 299,011 deadweight tonne (DWT) Gener8 Oceanus VLCC, now off the southeast coast of Taiwan en route to Singapore, and with a carrying capacity of about 2.2 million barrels, has been chartered to load gasoil.

One of the brokers said the ship would load more gasoil in Singapore before heading to Africa, though this could not be confirmed with ST Shipping or Glencore.

Separately, Koch Supply and Trading is expected to lease the 320,000 DWT VLCC Eco Seas on a time charter of about three months, although it was not immediately clear if it will load gasoil or crude initially.

The cargoes were likely fixed when freight rates for VLCCs were lower, but rates have since soared due to seasonal demand and increased cargoes from West Africa, shipbrokers said.

This news is a total 6290 time has been read
Tags: Glencore Shipping Arm Charters VLCC to Ship Asian Gasoil