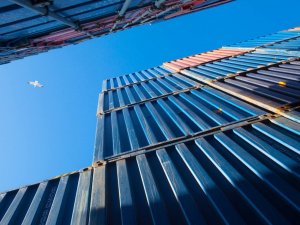 Global TEU volumes increased by 4% in 2014 to 135.4 million TEUs, the Port of Rotterdam Authority reports.

Inter‐continental trade rose by 3.4%, while intra‐regional volumes increased by 5.4% to 30.4 million TEUs.

2014 TEU volumes carried to and from Europe (including all countries bordering the Mediterranean) and between European countries increased by 5.4% to 46.9 million TEUs, according to Container Trades Statistics (CTS). Imports grew faster than exports: by 5.7% and 4.5%, respectively, while regional trade (excluding feeder boxes) was 7.3% higher.

Exports from Europe increased on all routes, except for Latin America. Trade to North America has benefited from the depreciation of the Euro against the US dollar, leading to a growth of 9.6%. Trade to the Middle East/ISC also rose by 9.1%. Exports to the Far East increased by 1.3%.

Container Trades Statistics cover overall inter‐continental deepsea routes and around 85% of the worldwide full container trade, and do not include feeder containers.

This news is a total 1860 time has been read
Tags: Container Trades Statistics, container volumes

U.S., China Move Closer to Trade Deal Despite Harsh RhetoricThe U.S. and China are moving closer to agreeing on the amount of tariffs that would be rolled back in a phase-one trade deal despite tensions over Hong Kong and Xinjiang, people familiar with the talks said.

How the Trade War and a Changing China Are Roiling Global ShippingBy Ann Koh and Serene Cheong (Bloomberg) –The trade war and China’s economic shift made 2018 a tough year for global shipping and will continue to reverberate through the industry, according to the United Nations Conference on Trade and Development.
FRONT ROW
1/20
PHOTO GALLERY
12345678
TOP NEWS
YESTERDAY| THIS WEEK |THIS MONTH
AUTHORS
12
Video Gallery
12345678
All Rights Reserved © 2006 TURKISH MARITIME | İzinsiz ve kaynak gösterilmeden yayınlanamaz.
Phone : 0090 212 293 75 48 | Fax : 0090 212 293 75 49 |