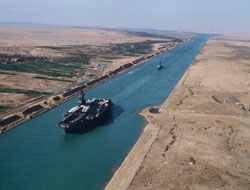 Egyptian economists are fretting, as the global economic crisis bites, hitting vital sources of government revenue, like tariffs from Suez Canal traffic. The canal authority reported that traffic for January was off by 22 percent, and that revenue was down by nearly 20 percent.

A cargo ship blows its horn, as it prepares to enter the Suez Canal at Port Said for the 14-hour trip south to the Gulf of Suez and then to the Red Sea. The canal, which was completed by French engineers in 1869, avoids the lengthy trip around Africa, and provides the Egyptian government with an important source of revenue.

Ted Seel, a Cairo-based security expert, explains that the fee structure for the Suez Canal depends on the size, or more specifically the weight, in gross tons, of a ship.

"The Suez Canal Authority has a fee schedule based on gross displaced tonnage, so a pleasure yacht might pay as little as $15,000 to go through the canal, whereas an aircraft carrier might pay more than $600,000," Seel said. "Certain classes of ship, and warships fall into the hazardous material category, they pay an automatic surcharge, in addition to the normal passage fee, and the surcharge can be as high as 35 percent."

Gouda Abdel Khaleq, Professor of Economics at Cairo University, argues that revenue from the canal is a vital element of the Egyptian economy and that its fortunes affect the country in several ways.

"The importance of the Suez Canal for Egypt, from an economic point of view, makes itself felt in two ways: one, as a source of foreign exchange to the country, and two, as revenue for the government, and hence it does have clear fiscal implications," he said. "So, against the backdrop of the global economic crisis, we're witnessing slowing down of international trade flows, and as a result, there is bound to be a reduction in the revenue generated by the Suez Canal."

The Suez Canal Authority reports that traffic in January hit its lowest level in five years, due to the global financial crisis, and the vexing issue of piracy off the Somali Coast.

Some shipping companies go the long way around Africa

Some shipping companies are reportedly going the long way around Africa, via the Cape of Good Hope, to avoid piracy in the Gulf of Aden, near Somalia.

Abdel Moneim Said, Director of the Al Ahram Center for Strategic Studies, however, thinks that issue of piracy is overblown, and is no longer a key factor affecting traffic through the Suez Canal.

"The piracy is zero. I mean, because the piracy is now handled by a number of forces, and the international trade, when it was going up last year and the year before was not affected by that factor. The major factor is slowdown of world trade, so people are not trading, so they are not passing through the Suez Canal," he said.

Egyptian President Hosni Mubarak noted, at the beginning of the year, that the global economic crisis was a major threat to Egypt, but that he was confident of surviving it.

He says that Egypt is facing new threats, especially that posed by the current world economic crisis, but stressed that he was confident in Egypt's ability to overcome them, as Egypt has overcome many other threats in the past.

Abdel Moneim Said believes that Egypt, like many other countries, is focusing on stimulating internal markets, in order to fend off the external crisis.

"Anything related to the world is going down, and the number one implication is that the Egyptian government and all world governments are trying to handle that through a number of steps, most important of which is to deepen the internal markets, so there is a stimulus plan in which there is 15 billion Egyptian pounds will be spent," he said.

"Everybody is asking this question, because the question doesn't concern Egypt only, it concerns the entire world, as we know, because this is a global crisis, and the question is being posed even in Europe and the United States, and nobody seems to have a clue," he said.

Abdel Khaleq, for his part, echoes IMF Managing Director Dominque Strauss-Kahn, who indicated recently that he doesn't see the world economy improving until the very end of 2009, or some time in 2010.

"We have a way to go before the turning point," Khaleq said.

This news is a total 6997 time has been read