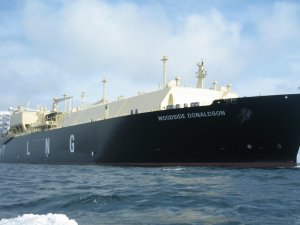 Global demand for LNG grew by 12.5% to 359M tonnes in 2019, with Japan, China and South Korea accounting for 50% of the market, according to Shell’s annual LNG Outlook

Demand for LNG has increased significantly with the global transition towards lower carbon-intensive energy to combat the impacts of climate change and meet the terms of the Paris agreement. Natural gas emits between 45% and 55% fewer greenhouse gas (GHG) emissions and less than one-10th of the air pollutants than coal when used to generate electricity, said Shell.

Over the last nine years, global cumulative CO₂ savings generated by switching energy sources from coal to gas stand at around 600M tonnes, equivalent to 57% of annual CO₂ emissions of South America, said Shell. In 2019, the number of coal plant phase-out announcements more than trebled compared to 2018, a major acceleration.

In effort to improve public health through its blue skies policy, China has been replacing some of its coal-fired power plants with gas-fired power generation, remaining a central driver in the demand for LNG. Its imports jumped 14%, reaching 61.5 mta in 2019 and will more than double to 127 mta by 2040 based on projections.

The modest rise in imports to Asia in 2019 compared to the previous two years was the result of mild weather and rising electricity generation from nuclear power in Japan and South Korea.

Behind Japan and China, South Korea is the world’s third-largest importer of LNG, with demand reaching 41 mta in 2019. South Korea’s imports should grow to 53 mta by 2040.

The fastest growing importer of LNG was the Indian subcontinent, topped by surging demand in India, Pakistan and Bangladesh that pushed imports up 19% to 36 mta in 2019. By 2040, LNG imports will grow 220% to 115M tonnes.

In 2019, there was a record 40M tonnes of additional supply added, led by new liquefaction capacity in the US. Much of this new production was absorbed by Europe as a result of declining gas production and pipeline supply and coal-to-gas power switching. Overall, Europe soaked up 90% of the LNG growth in 2019, importing 89 mta. By 2040, demand is expected to grow another 25% to 102 mta.

New LNG production capacity combined with a mild winter season in Europe and Asia and the coronavirus outbreak resulted in a glut of gas and falling prices.

“While we see weak market conditions today due to record new supply coming in, two successive mild winters and the coronavirus situation, we expect equilibrium to return, driven by a combination of continued demand growth and reduction in new supply coming on-stream until the mid-2020s,” said Mr Wetselaar.

The positive long-term demand outlook for LNG triggered a record number of FIDs in 2019, equating to liquefaction capacity of 71M tonnes, led by the US, Russia, Australia and Mozambique.

In the short-term, supply growth is expected to slow as the last of the new LNG liquefaction projects under construction will be completed by 2021 and equilibrium is expected to be restored as new supply comes to a halt until the mid-2020s, according to Shell.

The year also saw an increase in the commoditisation of LNG. An increase in diversity of contractual structures provided a wider range of options to LNG buyers.

Nearly 1,600 spot cargoes were delivered in 2019 and new spot-trading mechanisms and a wider variety of indices were used for long-term contracts. The more liquid and transparent global LNG market indicates LNG becoming an increasingly flexible commodity.

Led by Qatar, the Middle East continues to be the world’s largest exporter of LNG on a regional basis, with 97M tonnes shipped in 2019. LNG exports will grow to 161M tonnes by 2040. Additionally, more Middle East countries are expected to grow their imports of LNG. The UAE, Jordan and Kuwait imported 5 mta in 2019 and Bahrain will begin importing the chilled cargo in 2020. Overall, LNG imports will grow 600% by 2040 to 36 mta.

On an individual country basis, Australia emerged as the world’s largest exporter of LNG in 2019, shipping 75.9 mta. The expectations are for modest growth in its exports, reaching 85.7 mta by 2040.

In 2019, the US emerged as the world’s fastest-growing LNG exporter, adding five LNG trains to increase its total liquefaction capacity to 56M tonnes. American exports of LNG reached 37 mta in 2091 and are expected to increase 340% to 154 mta by 2040.

Africa exported 42M tonnes of LNG in 2019. Underpinned by additional liquefaction capacity from Mozambique and other African projects, it is expected to grow to 75M tonnes by 2040.

Russia, the largest gas exporter via pipeline, had LNG exports of 29 mta, expected to grow to 91 mta by 2040.

Global demand to double by 2040

Over the longer-term, global LNG demand is expected to double to 700M tonnes by 2040 according to forecasts, as gas plays a significant role in shaping a lower-carbon energy system. Asia is expected to remain the dominant region in the decades to come, with south and southeast Asia generating more than half of the increased demand.

By 2040, gas and renewable energy are expected to together supply 80% of the growth in global demand. Over half of the growth in natural gas use is expected to come from non-power sectors – such as industry, residential and commercial and transport – as more carbon intensive options are replaced.