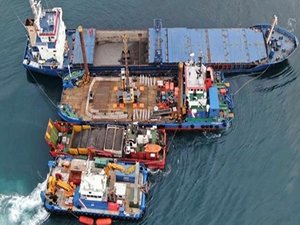 In the best conditions, maritime salvage projects are difficult and unpredictable operations that take a tremendous amount of calculated risk and best guesswork, stemming from these projects taking place in remote locations or areas with challenging environments and severe weather.

“Just as we have adapted and grown in the past, the new challenges presented by Covid-19 have strengthened Resolve’s ability to evolve and move forward,” he said.

“On a normal response, Resolve’s mobilisation is a well-oiled machine. But weeks into the pandemic, response teams were jumping hoops to ensure hazardous cargo did not spill into the North Atlantic,” Mr Farrell said.

He was speaking about Resolve’s recent projects, which included refloating grounded cargo vessel Kaami off Scotland, UK, in April 2020.

Resolve was involved in a host of global projects when the pandemic was declared, requiring agile decision making that ensured team safety, environmental protection, and casualty resolution.

For every project executed during the pandemic teams have adapted, taking advantage of collaborative technologies that allow senior project members and on-site teams to execute intricate projects while adhering to established safety standards. Covid-19 means situational decisions covering risk to life and the environment are based on challenges never encountered before.

The coronavirus pandemic demonstrates the importance of the human element to Resolve’s projects, such as access to senior response leaders from around the world.

During Kaami’s salvage, Resolve had to mobilise teams from several international bases, navigating rapidly changing travel restrictions. Salvage teams had to board the stranded vessel via helicopter to begin on-site assessments.

Never has the maritime salvage industry been faced with events impacting daily business operations as quickly as the recent pandemic, said Mr Farrell.

Kaami grounded into rocks off the Isle of Skye, Scotland, on 23 March with crew of eight seafarers and 1,900 tonnes of SRF pellets. It grounded on an exposed rock pinnacle that was exposed to strong currents and a 5 m tide difference.

Resolve Marine responded with salvage teams and equipment mobilised from bases in Europe, the US and Africa.

This turned into a comprehensive response operation requiring patching the raptured cargo holds and ballast tanks, lightering the cargo, and refloat operations.

Initial search and rescue efforts by the UK’s Maritime and Coastguard Agency (MCA) focused on safely evacuating the crew from the stricken vessel.

Soon after, a Lloyds Open Form was agreed between Resolve and the vessel’s owners.

A salvage plan was developed to mitigate pollution threats, stabilise the vessel and prepare it for refloating and towage.

Resolve’s immediate priority was to remove Kaami’s bunkers containing around 63 tonnes of fuel.

Once the fuel was removed, the team’s attention turned to removing the 1,900 tonnes of SRF pellets cargo, which posed a significant environmental threat.

Tide and current conditions created obstacles, allowing only a few hours between tides for lightering assets to position alongside Kaami to remove the bunkers and cargo.

After 43 days, Resolve’s salvage team refloated this casualty and towed it to Loch Kishorn drydock.