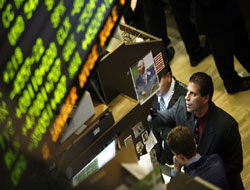 The 90 percent tumble in the global benchmark for commodity shipping costs since May exceeded the Dow Jones Industrial Average's plunge during the Great Depression.

The 90 percent tumble in the global benchmark for commodity shipping costs since May exceeded the Dow Jones Industrial Average's plunge during the Great Depression, signaling globalization is ''the biggest bubble of them all,'' Bespoke Investment Group LLC said.

The chart of the day shows the rise and fall of the Baltic Dry Index, a measure of freight costs on international trade routes, along with three other bubbles during the past decade identified by Bespoke: The Nasdaq Composite Index of technology stocks, the Standard & Poor's Supercomposite Homebuilding Index and the CSI 300 Index, a benchmark for Chinese equities.

The Baltic Dry Index's drop from its peak just five months ago surpassed all of those, along with the Dow's 89 percent retreat from 1929 to 1932, according to Bespoke.

''The Baltic Dry Index had a meteoric run since the start of the decade, as it became one of the key symbols of the ''globalization' trade,'' Paul Hickey, co-founder of the Harrison, New York-based research and money management firm, wrote in a report yesterday.

''It now appears that like any 'new thing,' the globalization trade went too far.''

The Baltic Dry Index fell yesterday for a 14th straight session as the freeze in money markets curbed traders' ability to buy cargo on credit.

The Nasdaq plunged 78 percent from 2000 to 2002 as investors concluded high-priced Internet stocks weren't supported by profits. The S&P index of homebuilder shares has dropped 82 percent from its 2005 peak as the U.S. suffers its worst housing slump since the 1930s.

China's shares have fallen in the past year as slowing economic growth and new regulations prompted traders to shun stocks that had climbed to the most expensive valuations among the world's 20 biggest markets.

This news is a total 1325 time has been read