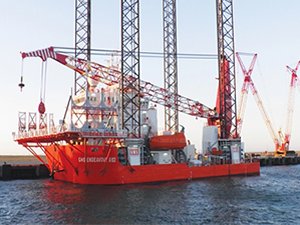 Gulf Marine Services’ jack-up vessel GMS Endeavour is set to be deployed at the Moray East offshore wind farm site to support the commissioning of the project’s offshore transformer platforms.

The vessel will arrive at the project site on or around 19 August, from when it will provide accommodation for workers carrying out commissioning works on the OSP1, OSP2 and OSP3 offshore transformer modules (OTMs).

The first of the three Moray East OTMs (OSP3) was installed in the first half of August, shortly after it was dispatched from Belgium, where Smulders and Engie Fabricom have been building the OTMs for Siemens Energy.

The jacket foundation for OSP2 was installed on 10 August, with the OTM platform expected to have been installed by the end of the last week.

The OTMs, which will be linked together to cover Moray East’s rated capacity of 950 MW, will transform the output of the wind turbines from 66 kV to the transmission voltage of 220 kV and transmit the electricity to the grid on land.