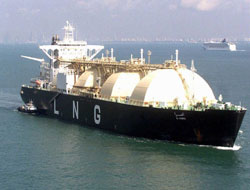 John Fredriksen?s Golar LNG is suspending dividend payments for at least two quarters as the company seeks to safeguard its cash position.

John Fredriksen"s Golar LNG is suspending dividend payments for at least two quarters as the company seeks to safeguard its cash position.

John Fredriksen"s Golar LNG is suspending dividend payments for at least two quarters as the company seeks to safeguard its cash position in the face of the continuing global credit squeeze.

The company also said it expects rates for liquefied natural gas carriers to remain weak for the next six months.

Golar"s comments accompanied fourth quarter results which showed a net loss of $57.7m compared to a modest profit of $900,000 in the corresponding period of 2007.

However, the latest quarter was hit by a charge of $57m, largely relating to losses on non-cash interest rate swap valuations and foreign exchange translation.

In the final quarter of 2007, the charge for other financial items was $8m.

Fourth quarter revenues slipped to $59.5m from $61.3m, although they were ahead of the $58.1m chalked up in the third quarter of this year.

Golar said headline spot charter rates retained the improvement seen in the third quarter for the early part of the final three months but began to fall toward the end of the period.

Average utilisation increased to 84% from 83% in the preceding three months while average daily time charter equivalent rates improved to $46,407 from $43,443.

Golar expects the ratio of available spot vessels to worldwide LNG production to decline in the next few years with no reduction in long haul trades.

However, in the short-term the company believes spot charter rates will ?stay depressed? for the first half of this year with a steady improvement possible from mid-year.

Golar said the Hilli and Gandria, both 125,000 cu m and built in 1975 and 1977, respectively, were unemployed in the fourth quarter and not expected to have earnings throughout 2009.

?The first half of 2009 will be a difficult trading environment for the company"s spot trading ships with a reduction in earnings anticipated for the first quarter 2009,? the company commented.

?However, there is a realistic hope for improvement in the second half of 2009 as new capacity comes on stream and cargoes start trading west.?

Golar is confident that the development of projects for floating storage and regasification units and floating liquefied natural gas will lead to ?attractive? near-term investment opportunities.

?Taking this into account and the current squeeze in credit markets the board has decided to suspend the dividend payment for at least the next two quarters or until financial market conditions normalise.?

Golar said its agreement to take the full output of the Gladstone LNG project on a free on board basis would utilise up to two of its existing vessels.

A final investment decision on the australian project, in which Golar will have a 40% equity stake, is expected toward the end of 2009, with first production scheduled for 2012.

This news is a total 863 time has been read