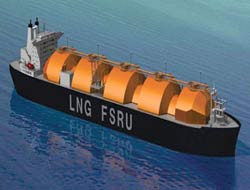 Both vessels will be modified to permit regasification of LNG prior to delivery to Petrobras. The contract duration for both vessels is 10 years with an option for Petrobras to extend for a further 5 years. The estimated contract value (excluding the option period) is approximately US$860 million.

Golar says that during the last five years it has spent significant resources on developing Floating Storage and Regas Terminal technology.

The knowledge built in this period and particularly a decision to start the conversion work for Golar Spirit without having secured firm employment put Golar in a strong position to be selected for what it calls "this exciting new business."

Golar says it is working in close partnership with Moss Maritime to develop the technical scope for the vessel modifications. Work to modify Golar Spirit will be carried out at Keppel shipyard commencing in the fourth quarter of this year.