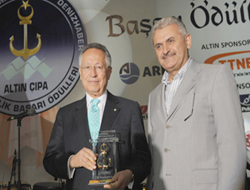 ALTIN ÇIPA (GOLDEN ANCHOR) which is accepted as Turkish Maritime Oscar, and its achievement awards were delivered to winners in a ceremony in Rahmi Koç Museum.

Maritime Oscars have found their owners

ALTIN ÇIPA (GOLDEN ANCHOR) awards which is accepted as Turkish Maritime Oscars met their owners in a ceremony.

Ceremony of ALTIN ÇIPA Turkish Maritime Achievement Awards which is organized as third this year by Dünya Per?embe Rotas? and Deniz Haber Ajans? (Maritime news agaency) was made on 27 July, 2008 ,Friday at Rahmi Koç Museum.

Mr. Recep Canpolat, president of GOLDEN ANCHOR organization Committee and President of Board of Directories made a speech at the ceremony and said ?I am very pleased to see that ceremony of GOLDEN ANCHOR achievement awards which was started three years ago ,and now it has an international structure ? he also added ?Three years ago I suggested this project to Dunya Newspaper ? he thanked to Didem Demirkent and Erdem who are in management of Dünya Gazetesi (Dunya newspaper).

Mr. Canpolat stated that their purpose is to increase motivation of Turkish Maritime Companies and their directors due to their successes and added ?Talent deserve to have compliments, and now we have appreciated who are talented.? 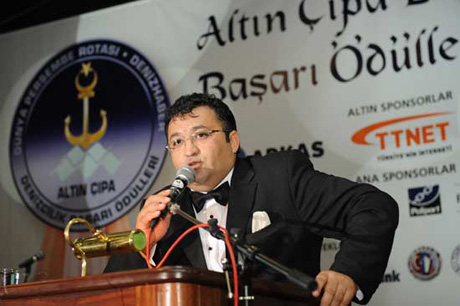 Mr.Erdem Top: We are for the sector 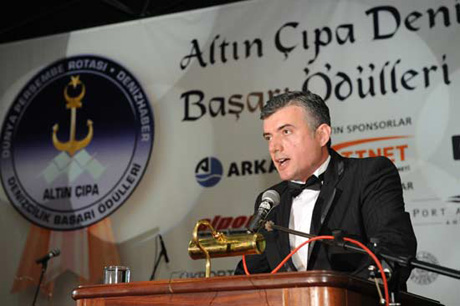 Mr. Kalkavan: We have proved success of Turkish Maritime

He received Ship owners award ? and Ship operation award was received by Turkon Line. Metin Kalkavan, CEO of Turkon Line took the award from Maritime Undersecretariat, Hasan Naibo?lu made a speech at the ceremony and said ?Here, I would like to say some things as not only being a ship owner but also as President of Chamber of Shipping, because maritime is very important for Turkey and the world. More healthy and more qualified life can be provided only by maritime and by sea ways. Turkish Mariners would like to dialogue with international maritime organizations in the best ways. We would like to develop our relations, however; I should say frankly that from time to time we have in some difficulties. Sometimes even getting an appointment can be very difficult. Especially, by the end of 2002 we were in a very difficult situation. To contact with Dear Mr.  Mitropoulos and Karamitsos was very hard. Here I thank to Dear Mr. Mitropoulos, General Secretary of IMO. It took our 5 years but, eventually we succeeded. As Turkish Mariners we spent a great deal of efforts and we have proved that in international field we can be in the white list. About this matter, we have shown that we can cross all the barriers and reach to the success.  At the meantime, our ministry of Transport also contributed a lot. Now, for the first time we have a ministry which focuses maritime. I should thank to our local banks. In these processes they have supported us for ship finance. If this finance were not exist we could have not reached to this success.? 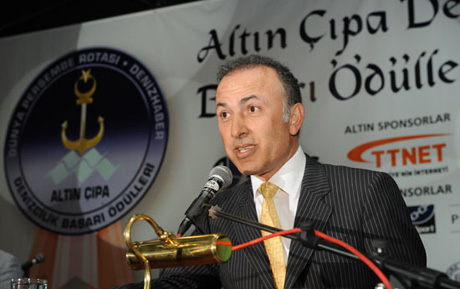 In the ceremony Ministry of Transport Mr. Binali Y?ld?r?m made a speech and said ? Turkish Maritime have been reached to  great deal improvements in the last five years? and continued his speech"

Improvements of technical and security standards in  ships with Turkish Flags in international maritime transport ; increase of controls in ports ; the ships which are kept in foreign ports are getting lessen ; EU averages have been reached ,and these are very important improvements of Turkey in the last few years. According to the Paris Memorandum, the ships with Turkish flags, and ships with average standards were taken out from the black list ,and now they are in candidate position to be in the white list. This is very important success. There is nothing important than human security, life and property securities. People for any reasons should not lose their lives and their goods. About this matter we have made a great improvement. Regarding ship construction, Turkey also, have made developments in the last years. Whilst, in the world, in the last four years, average growth is 89%, now in Turkey this growth have become 360%? 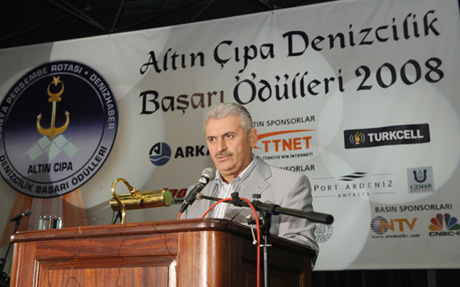 After the speech of Mr. Binali Y?ld?r?m, Ministry of Transport, among the chosen candidates by jury of GOLDEN ANCHOR as per 2008 GOLDEN ANCHOR criteria the winners have received their awards.

In this category, in this year two companies simultaneously have been rewarded. Among the winner companies the first award was taken by Dentur Avrasya . President, Board of Directors of  Dentur Avrasya , Ramazan ?enol H?zarc?  took the award on behalf of his company from the President of Mediterranean Memorandum and General Manager of Malta Maritime Administration, Mr. Lino Vassalo. Mr. Hizarc? thanked for everybody who has contributed, and Mr. Lino Vassalo said "This ceremony is magnificent which mariners have been awarded, and I am very pride of this.? 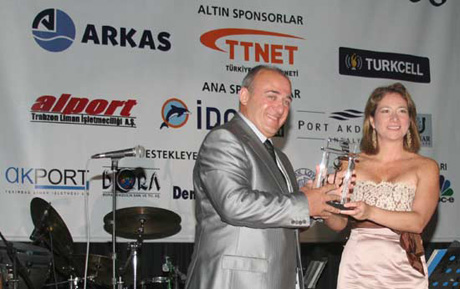 President,Board of Directories of TURYOL, Mr. Yunus Can, took his award from Panama IMO representative and Ambassador Mr. Lilliana Fernandez.

In the same category, President, board of Directories of Turyol Mr. Yunus Can was rewarded and his award was given by IMO Panama Representative, and Ambassador Mr. Lilliana Fernandez. On behalf of Turkish Maritime, after thanking to organizers Mr. Can said ?I hope  this motivate contest shall continue?. Mr. Fernandez stated that he felt being among friends and added ?These awards are reflections of important improvements of  Turkey"s  in  maritime field. 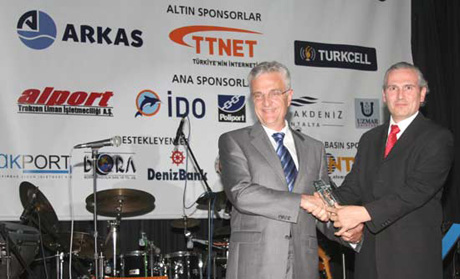 Under the title of Ship Construction Industrialists award as being one of the two sub-categories ?Ship Construction Award? winner is  Gelibolu Gemi Sanayi. On behalf of the company, President of Board of Directories, Mr. Mehmet Aksoy took his award from President of Maritime Satellite Information Organization, Mr. Esteban Vincente Pacha. Mr. Aksoy said? Golden Anchor award is a pride for us? and added ?I took this award on behalf of all my staffs.? Mr. Pacha, also, made compliments and congratulated to the company due to its success. 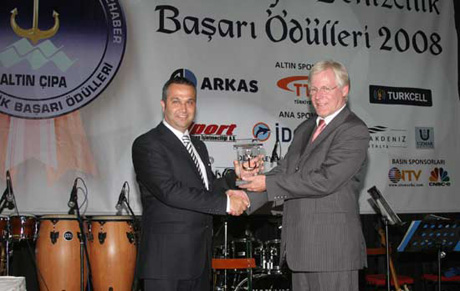 Arkas Denizcilik ve Nakliyat A.?. was rewarded for ?ship agency award?, and General Manager, Mr. Murat Denizeri took his award from General Secretary of Paris Memorandum, Mr. Richard Schiferli. Then, Mr. Denizeri, said ?He took the award on behalf of all Arkas family.? Then Mr. Schiferli said? Not long ago, Turkish Maritime was taken from black list to the grey list .Now, Turkish Maritime has successful graphic. ? He stated that this improvement should continue, and in a short time Turkey should be in the white list and Turkey should be where she deserves ? 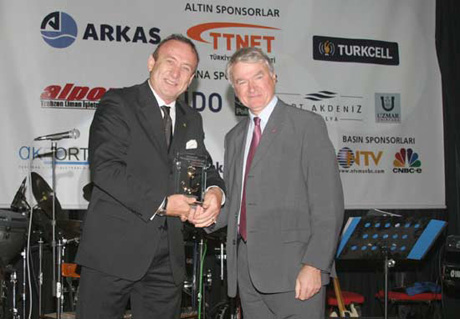 In Terminal and Port Operations Category for Yacht Port Award, Orhaniye Mart? Marina was found worthy to be rewarded. The award was given by General Secretary of INTERCARGO, Mr. Roger Hold to General Manager of  Orhaniye Mart? Marina, Mr. Ercan Güne?tutar. Then, Mr. Güne?tutar thanked to everybody for their contributions, and said? Now, Turkey have collected knowledge about marina sector that they can teach to all over the world?. Then, Mr. Hold stated that cooperation with Turkey is very important for them. 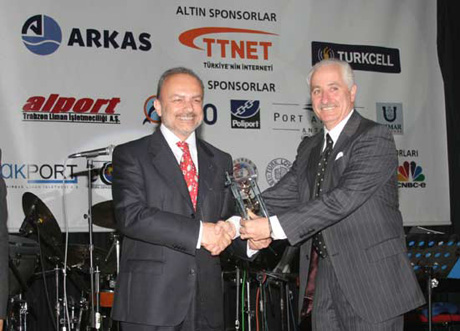 In Ship Technologies sub-category the award was given to  Bora Elektrik. President of Board of  Directories of BORA ELEKTR?K A.?., Mr. Mehmet Alev Tunç took his award from IMO Italy representative admiral  Giancarlo Olimbo. Then, Mr. Tunç said ? The award is a very important motivation for us .? He added ?Bora Electrik is a family consists of 150 people.  And the real winner of the award is General Manager of the company, Mr. Sinan Ar?ca?. Then he gave the award to Mr. Ar?ca. 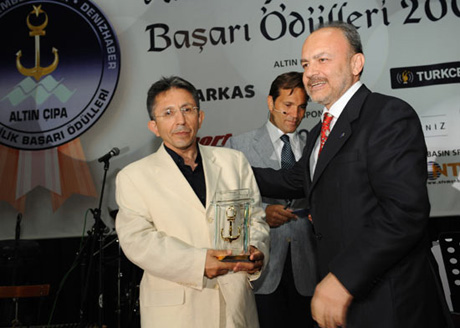 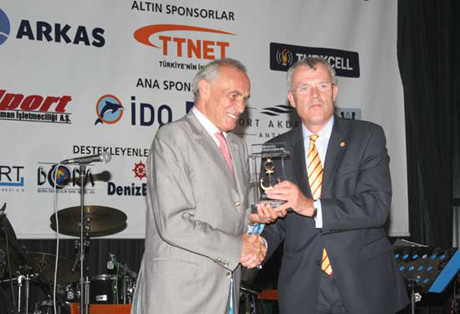 Yacht / Boat construction award which has sub-categories was given to President of Board of Directories of Proteksan Turkuaz Yat Sanayi, Hayati Kamhi by President of Board of Executers of International Ship Engineers Science and Technology  Institute, Mr. Michael Everard. Mr. Kamhi said ?This meaningful award will motivate our works after awards .?Then, Mr. Everard said? Similar to Turkish football team Turkish Maritime sector blow like storm? 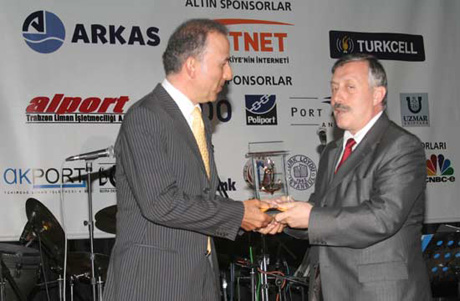 In this category the award was presented to the company CEO, Mr. Metin Kalkavan by Presidency Maritime Undersecretariat, Hasan Naibo?lu. Mr. Kalkavan said ? From time to time, we have difficulties to explain improvement of Turkish Maritime Sector to top managements of maritime organizations. Also, by the opportunity of Golden Anchor, I am very pleased to seeing managers of international organizations together with Turkish mariners. All the mariners are one nation?. Then, Mr. Naibo?lu mentioned importance of seas for mankind. 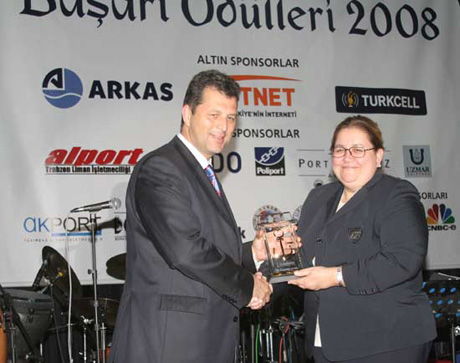 In this year, on Ship Finance Branch the award winner was  Yap? Kredi Bank. Its Golden Anchor was presented by President of Dunya Group Companies, Ms. Didem Demirkent to General Manager of Yap? ve Kredi Bank, Mr. Tayfun Beyaz?t. Then, Mr. Tayfun Beyaz?t said? We will continue to support maritime sector which is a developing sector. ?Then, Ms. Demirkent said? There is nothing else to say for me other than the pride we have for this sector. I am very pleased that we participated to this organization.? 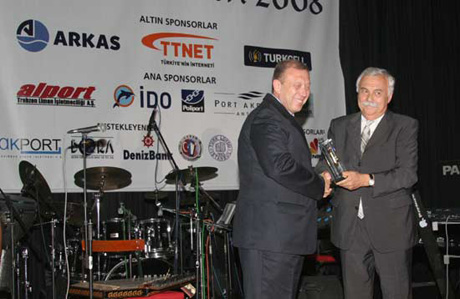 In this category, awards were given under two sub-categories as ?Cargo and Yacht Ports?. Cargo Port award winner was Gemport Gemlik Liman ve Depolama ??letmeleri, and on behalf of the company the award was given to Company General Manager, Mr. Cüneyt Acar by European Union Transport Union and Energy Director, Mr. Fotis Karamitsos.

Mr. Cüneyt Acar, said ?For this award all our staffs worked.?Then, Mr.   Fotis Karamitsos said? Developments in Turkey is very much impressive for us.? 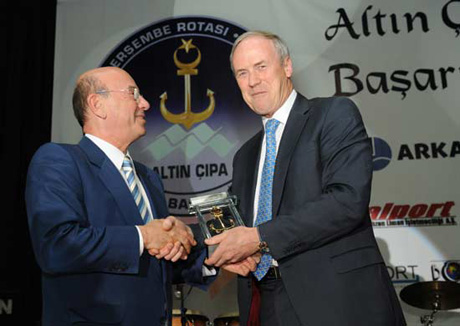 TURMEPA, found worthy for getting an award, and its award was given to President of Board of Directories, Mr. E?ref Cerraho?lu by Director of  INTERTANKO, Mr. Peter Swift.

Director of INTERTANKO, Peter Swift said to the President of Board of Directories of TURMEPA, Mr. E?ref Cerraho?lu that it was important that maritime sector should reach the highest standards, and to make this, cooperation was needed. Also, he stated that they believed cooperation will lift the sector. Then he added ?Especially, I would like to thank to TURMEPA , because TURMEPA has been developing worldwide, and sings under very good works? . Then, Mr.  Cerraho?lu said ?While global warming and climate changes are in our agendas, I am very pleased to get an award of Golden Anchor. Mr. Mitropoulos has provided any kinds of supports to  TURMEPA. ?Then he thanked to Ministry of Transport, Mr. Binali Y?ld?r?m and Maritime Undersecretariat. He added? Our Maritime Undersecretariat has helped us and taken any kinds of protections. 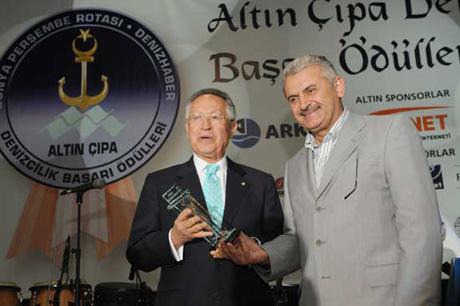 Due to the support for holding 82nd  Sea Safety Committee meeting in Istanbul, and contribution for introduction of Turkish Maritime in international society, General Secretary of  IMO, Mr. Eftihimios Mitropoulos was found worthy to be rewarded by GOLDEN ANCHOR organizer committee for ?Lifetime Achievement Award? The award was presented to General Secretary of IMO by Ministry of Transport, Binali Y?ld?r?m.   www.TurkishMaritime.com.tr