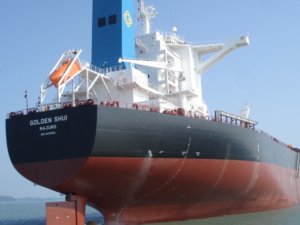 Norwegian dry bulk owner Golden Ocean Group Limited has reached an agreement with shipyards to defer the delivery of its six vessels currently under construction.

This brings the total number of defferals to ten newbuildings, as the company achieved aggregate price reductions of USD 15.3 million.

These agreements are still subject to final acceptance from the yard’s refund banks.

Furthermore, Golden Ocean said it returned to profit during the fourth quarter of 2016 as its net income for the period stood at USD 6.5 million, compared to a net loss of USD 69.2 million seen in the same three months in 2015.

“Freight rates improved during the fourth quarter as the dry bulk shipping market saw increased demand, combined with port congestion and a tight Atlantic market. The quarter was also characterized by rate volatility, which could be an early sign of a recovering market,” Birgitte Ringstad Vartdal, Chief Executive Officer of Golden Ocean Management AS, said.

“As earnings have strengthened and are now above the levels anticipated in our first quarter 2016 restructuring, we expect that a cash sweep will be triggered in the second quarter of 2017,” Per Heiberg, Chief Financial Officer of Golden Ocean Management AS, added.

Global dry bulk demand as measured in tonne-miles continued to increase during the fourth quarter of 2016, with year-on-year growth for the quarter of 1.4%. For the full year, tonne-mile demand for dry bulk commodities increased by 2.1% compared to 2015.

This news is a total 1021 time has been read
Tags: Golden Ocean Pushes Delivery of Six Newbuildings