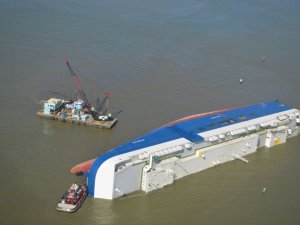 A Unified Command responsible for the response and salvage efforts for capsized cargo vessel Golden Ray has continued operations after they were previously halted due to weather conditions.

The Hyundai Glovis-operated vessel started listing heavily after it became disabled on September 8. Of the 24 persons on board, 20 were evacuated immediately while the remaining four were extracted in a subsequent operation.

A Unified Command, consisting of the U.S. Coast Guard, Georgia Department of Natural Resources, and Gallagher Marine Systems, was formed on September 11 with the aim of ensuring the safety of the public and responders and facilitating the eventual salvage and safe removal of the vessel.

After being temporarily suspended due to heavy weather from Hurricane Humberto, operations resumed in full on September 16, with teams deploying response equipment and continuing salvage operations.

The command said that no impacts on air quality have been detected to date, and a water-quality monitoring plan is being developed.

Commercial traffic in the Port of Brunswick has resumed on a case by case basis.

This news is a total 340 time has been read
Tags: Car Carrier, Golden Ray, US Coast Guard.