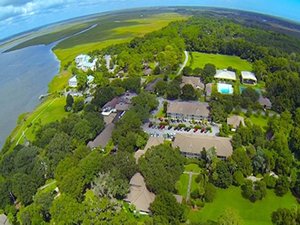 After experiencing a COVID-19 outbreak earlier this year, the salvage team for the grounded ro/ro Golden Ray has leased out the entirety of a nearby Christian retreat and conference center in order to stay within a sequestered environment.

The center, Epworth by the Sea, is located on the Mackay River, adjacent to St. Simons Sound and just a few miles by water from the wreck site. The staff will have the grounds to themselves between September 22 and January 1, and two nearby streets will be secured to ensure that no members of the public accidentally break the quarantine perimeter. All intoxicants are prohibited on the premises.

"I am sorry for any inconvenience that this action may cause," said Epworth CEO Joel Willis in a message to the community. "I am sure you all will agree that the safety of the workers is paramount and the need to remove the wreck is a priority. We look forward to reopening the campus for your enjoyment after the workers depart."

The Golden Ray salvage is among the largest and most complex wreck-removal projects in American waters in recent memory. The salvors will take the hull away in sections using chain cutting and hoisting, a dramatic process that is expected to result in falling cars (the ro/ro's cargo), fires and the potential for a petroleum release.

In the first phase of salvage preparation, contractors built a containment barrier around the wreck site to keep pollutants and debris within a limited area. The second and final phase was initially expected to start in July, but when nine members of the team tested positive for COVID-19, the unified command for the response opted to delay work until September, after the riskiest months of the hurricane season.

“While we are proud of the fact that our response protocols and responder discipline have held COVID-19 at bay until early July, [it] has finally impacted this response," said Incident Commander Tom Wiker of Gallagher Marine Systems in July. "To date, 10 responders have tested positive and more than 50 responders, out of approximately 300 personnel, have been quarantined due to contact tracing."

This news is a total 1878 time has been read
Tags: Golden Ray Salvage Team Rents Out Resort for COVID-Safe Lodging