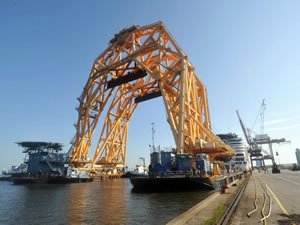 The heavy lift vessel VB10000 will soon head to St. Simons Sound in Georgia where it will prepare for cutting and lifting operations in the salvage of the Golden Ray wreck.

The vessel is expected to arrive as early as next Tuesday, weather permitting.

The U.S.-flagged VB10000 has been being prepared for job at the Port of Fernandina, Florida.

The vessel’s crew has been sequestered inside a “bubble” in order to mitigate their COVID-19 exposure ahead of the operation.

“The arrival of the VB10,000 has been highly anticipated. It’s a very capable asset implementing the latest in heavy-lifting technology for marine environments,” said Cmdr.

Efren Lopez, Federal On-Scene Coordinator. “The vessel is a critical component to our removal plan that ensures the safety of our responders and the public as we move forward and remove the Golden Ray.”

The VB10000 will cut the wreck into eight sections inside an already established Environmental Protection Barrier and lift the sections onto a barge for transport to a recycling facility.

A 150-yard safety zone around the EPB has been established and mariners are advised to steer clear of the perimeter. Also, authorities are telling the public that unauthorized use of drones is prohibited around the wrecksite. Responders will report any sightings of drones and drone operators to local authorities.

The Golden Ray was carrying about 4,200 vehicles when it lost stability and grounded as it departed the Port of Brunswick more than a year ago in September 2019. All vehicles remain inside the ship’s cargo holds.

The salvage operation, one of the largest marine salvages in U.S. history, has so far faced several hurdles, including the COVID-19 pandemic which forced the suspension of on-site work in July after several workers tested positive for the virus.

More recently, an issue with the mooring system of VB10000 further delayed the operation by several weeks.

The Unified Command overseeing the response has said previously that the cutting and lifting operation is expected to take eight weeks.