Golden Ray to Be Disassembled in St. Simons Sound 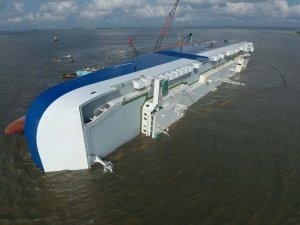 The capsized car carrier Golden Ray would be disassembling into pieces in order to remove it safely from the site, according to the St. Simons Sound Response.

The Unified Command has completed the lightering of the forward fuel oil tanks onboard the vessel, with more than 225,000 gallons of fuel being removed to date. Lightering of the remaining fuel and lubricant tanks continues.

The officials explained that maritime experts engaged in the response have determined that it is not possible to safely right and refloat the vessel in a fully intact condition. Consequently, Unified Command is developing plans to remove all of the Golden Ray’s hull, components, and cargo by disassembling the vessel in place.

Pollution mitigation and response efforts will continue throughout the duration of the removal operation.

The Hyundai Glovis-operated car carrier started listing heavily after it became disabled in early September in St. Simons Sound near Brunswick, Georgia. Of the 24 persons on board, 20 were evacuated immediately while the remaining four were extracted in a subsequent operation. The vessel was carrying about 4,000 cars bound for the Middle East.

This news is a total 223 time has been read
Tags: Georgia, Golden Ray, Lightering.

MOL Apologizes for Wakashio Grounding in MauritiusThe operator of a Japanese bulk carrier which ran aground off Mauritius in the Indian Ocean apologised on Sunday for a major oil spill which officials and environmentalists say is creating an ecological disaster. Marine Insurance Losses Seen Below $250 Million from Beirut BlastInsurance claims for damage to ships, goods and the port itself after a warehouse explosion last week in the port of Beirut were likely to total less than $250 million, reinsurance broker Guy Carpenter said on Monday.