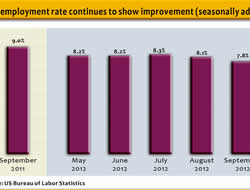 UNEMPLOYMENT in the United States has fallen from 8.1 per cent in August to 7.8 per cent in September, according to the latest data released by the countrys Bureau of Labor Statistics.

The figure also represents the first time the unemployment figure has dipped below eight per cent since January 2009, reports Australian Association Press (AAP).

In addition to the positive news on US unemployment, sources we have spoken to also believe a late peak season is also possible for the transpacific trade this year…

In a recent interview with Port of Long Beach executive director, J. Christopher Lytle, he told The Container Shipping Manager that he believed there would be a “decent bump” in volumes coming into the west coast port through October and early November.

He also pointed to several factors such as an improving housing market in the US and improving auto sales as reasons to be a little more optimistic on US shipping demand going forward.

Recently in this publication we cited an Export Development Canada report that said savings among Americans was not only on the rise, but there were indications that they were ready to spend again.

This of course has positive implications for the shipping industry as more people will presumably have cash to spend on consumer items, which ultimately drives the world’s containerised trade.

But even with the latest news coming out of the US it is important to keep this all in perspective. After all, the unemployment rate is still at a very high level and the economy is still rather sluggish. So when we talk of the potential positive impact that improved unemployment and increased savings could have, we are talking only about a marginal improvement.

As Mr Lytle said in our story last week, we will likely see a “decent bump”.

This news is a total 3828 time has been read