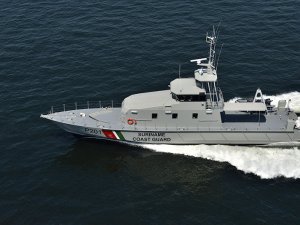 The Government of Ukraine gave its green light for the procurement of 20 FPB 98 patrol vessels made by French shipyard OCEA.

This is the first step towards a large-scale project to strengthen the country’s maritime borders security.

“A major agreement will soon be signed between the Governments of Ukraine and France, after which the Supreme Council of Ukraine will have to ratify it,” the Ukrainian Ministry of Internal Affairs said on November 15. According the service, delivery of the vessels will start within three years.

« The maritime section of the Ukrainian border is by far the most vulnerable, we need more and more capabilities on water. Naval bases and 19 vessels remain in the occupied region of Crimea, and 80% of our existing ships are technically outdated and need constant updating, » the Minister of Internal Affairs, Arsen Avakov said.

Avakov added that the OCEA proposal was the most advantageous, economically speaking, for Ukraine, as France offered a comprehensive approach to credit financing and agreed to localize 25% of the production in Ukraine.

The contract value is € 136.5 million. It includes « partial financing from loans from both commercial banks and from the Treasury loan of the Ministry of Finance of France. The loan is provided by the state of France. Ukraine will 15% from the budget, while the remaining 85% will be provided by the loan, » the Minister of Internal Affairs explained.

In addition to the production and supply of ships, the project consists in a comprehensive service offer which includes training of 240 crew members and 120 technical personnel, spare parts and tools required for maintenance during 2 years of operation (or 2400 hours), and technical support in Ukraine within 60 months from the date of delivery of the first ship.

OCEA’s 32 meters-long FPB 98 patrol vessel has a crew complement of 13 sailors and features a maximum speed of 30 knots. The FPB 98 is currently in service with the Suriname Coast Guards and the Nigerian Navy.