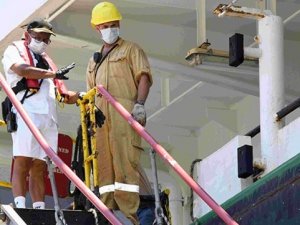 The shipping industry responded to these efforts calling the summit a positive step but challenging the nations to follow through with actions.

At the conclusion of the International Maritime Summit hosted by U.K. Transport Secretary Grant Shapps and Maritime Minister Kelly Tolhurst, the 13 nations in attendance issued a joint statement acknowledging the challenges faced by seafarers and committed to pursuing efforts to better facilitate the crew changes.

They outlined new international measures that could open up foreign borders, explore waving visa and documentation requirements, and increase the number of commercial flights to expedite repatriation efforts.The shipping industry responded to these efforts calling the summit a positive step but challenging the nations to follow through with actions.“Today marks a new chapter for seafarers and, alongside our international partners, we are taking a stand to end the bureaucracy preventing men and women around the world from returning home,” said Transport Secretary Grant Shapps.

The virtual summit brought together members of the UN with political and business leaders from across the globe to discuss the issues facing seafarers and the challenges that have been made worse by the restrictions related to the spread of the coronavirus.

Kitack Lim, UN Secretary-General of the International Maritime Organization, gave a special address to highlight the difficulties seafarers are facing, and all governments and parties participating in the summit were urged to resolve the issues to support seafarers and the industry more widely.

Representatives from 13 countries, including Denmark, France, Germany, Greece, Indonesia, Netherlands, Norway, Philippines, Saudi Arabia, Singapore, UAE, U.K., and U.S., recognized the urgency and pledged to a series of initiatives. Specifically, they said they would encourage all IMO states to designate seafarers as key workers and would consider using seafarers certificate, ID documents, and letters from carriers as proof of the key worker status and for their travel.

They also committed to engaging in discussions to develop a protocol for crew changes during the pandemic as well as exploring waivers and other temporary measures to permit travel while also working with the aviation industry to increase travel access.

The joint statement specifically acknowledges “as a matter of urgent concern,” seven key issues ranging from the inability of ship operators worldwide to conduct ship’s crew changes to the fact that seafarers’ tour of duty cannot continue to be extended and that at least 200,000 seafarers require immediate repatriation.

They agreed that the health and wellbeing of seafarers is paramount and that concerted action is required made more urgent by the uncertainty around additional waves of the virus.Some of the nations participating in the conference also used the opportunity to highlight their initiatives. For example, the U.K. also announced a program to support seafarers off its shores with mobile internet routers – MiFi units – to immediately provide free internet access on board for the hundreds of seafarers still waiting to return home.IMO Secretary-General Kitack Lim responded to the summit by issuing a statement saying that the IMO welcomed the commitment of 13 countries to facilitate crew changes and achieve key worker designation for seafarers.

“This step represents significant progress to help resolve a growing crisis facing the maritime industry, and enable hundreds of thousands of stranded seafarers to go home or join ships,” said the IMO.Secretary-General of the International Chamber of Shipping Guy Platten issued a similar statement saying, “This summit is a welcome show of political leadership at a time when seafarers across the world need it most. Governments must now use this summit as a catalyst to implement with the solutions the shipping industry has provided, applying the political will needed to put them into practice.

This issue doesn’t require money and did not need complicated negotiations. This summit is a catalyst for action.”Representatives of the shipping industry however welcomed the initiatives while calling for additional actions.

The International Transport Workers’ Federation (ITF), which for example has repeatedly called on governments to act, responded to the summit with a statement with what it hopes will be the next actions.“We thank those countries who came together today for their commitment,” said ITF general secretary Stephen Cotton, “and now call on those ministers and officials who signed the dotted line need to head back to their countries and follow through on these critical pledges by bringing in practical exemptions and waivers that allow seafarers to move freely to enable safe crew changes and repatriation to their home countries.”Speaking to the governments of the world, the ITF said that while their focus may be predominant on responding to the economic challenges of the Covid-19 pandemic, that the response cannot ignore the plight of seafarers, and their fundamental human dignity.

This news is a total 1395 time has been read
Tags: Governments Pledge Actions for Seafarers and Crew Change at UK Summit