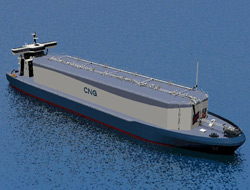 The additional versions are based on a similar design which was approved for construction by ABS in September 2006. Theywill primarily be engaged on international voyages.

"CNG carriers are a cost effective, reliable and safe alternative to the traditional ways of transporting natural gas via subsea pipelines or Liquefied Natural Gas (LNG) carriers," says Dan Koch, GPA's Vice President of Engineering. "When circumstances allow it, pipelines provide the best option for transporting gas over short distances, while Liquefied Natural Gas carriers offer various advantages for large quantities of natural gas to be transported over long distances. With the innovative concept of the Coselle CNG Carriers, which utilize Coselles, a new technology consisting of large coils of pipes wound into a cylindrical storage container to contain compressed natural gas, gas producers are being offered an economically optimal solution for the transportation of moderate volumes of natural gas over medium distances. Thus, the Coselle CNG carrier is the first method supporting this segment of the marine gas transportation market that is not economically served by pipelines or LNG ships."

The original 118-meter CNG carrier, for which GPA completed the design in 2006, will have a capacity of 50 mmsCF (million standard cubic feet) in 16 Coselles.

The Coselles are arranged in four equally sized stacks, each four high, in a fully enclosed and inerted cargo house on the main deck. A major advantage of the Coselle system is that it requires minimal onshore facilities due to the ability to load and discharge gas at simple portside facilities not requiring liquefication and regasification equipment, which greatly reduce environmental, land-use and financial concerns.

The vessel, which under ABS will be classified as Maltese Cross +A1 Compressed Natural Gas Carrier, E, +AMS, +ACCU, +APS, UWILD and can accommodate 11 crew members, will be equipped with two azimuthing Z-Drive propulsion systems and one bow tunnel thruster.

The two additional versions will differ from the original 118-meter CNG carrier mainly in size, and natural gas capacity.

One of the two designs measures 204 meters in length, accommodates 20 crew members, and will be equipped with 84 Coselles, providing a combined natural gas capacity of 250 mmsCF.

The other GPA CNG version will measure 141 meters in length, accommodate 11 crewmembers, and have the capacity to carry 75 mmsCF in 25 Coselles, which will be arranged in five stacks of five Coselles each.

"The CNG carriers will provide the market with a safe, reliable and cost effective method to transport natural gas by sea and also deliver natural gas to underserved markets," Dan Koch concludes.

This news is a total 1018 time has been read