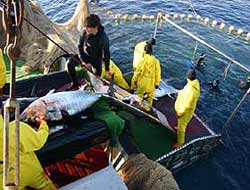 Europe’s biggest gilt head bream and sea bass producer Greece has started to sell the fish it imports from Turkey over the last year.

Europe"s biggest gilt head bream and sea bass producer Greece has started to sell the fish it imports from Turkey over the last year. Greece plans to use Turkey as a base for cultivated fisheries since production is expensive in Greece, says the authorities.

Turkey's fishery products exports incresased by 35 percent in the first six months of 2007. It is noteworthy that Greece, Europe's biggest producer in the sector, is one of the countries Turkey exports fishery products to. “A substantial proportion of the exports goes to Greece. Turkey has exported to Italy for years, and it has grown greatly Spain, the United Kingdom, France and the Netherlands in the last five years," said Bülent Ak?n Özder, the board member of Aegean Livestock Fishery Products Exporters' Association. “We exported over 3 million kilograms of fish amounting to approximately $18 million in the first six months to Greece. We had exported around 1 million kilograms totaling $6.5 million over the same period last year,” said Özder. It is also interesting that Greece, as Europe's biggest gilt head bream and sea bass producer, imports from Turkey, he added. Greece buys from its rival Turkey and sells to European market under its own control. Greece makes use of marketing network that is widespread in Europe and Turkey is good at production but not at marketing, Özder explained. “Production in Greece is very expensive. There is a notable potential in Turkey regarding fishery products. Therefore Greece wants to invest in Turkey on fishery products. Greece will use Turkey as a base in cultivated fisheries,” said Özder.Greek producers have started to come Turkey for investments in fishery products. Nireus, one of Greece's biggest producers, purchased a facility with 5,000-tons production capacity in Aegean Region. Another Greek producer Selonda is also negotiating with Turkish companies. Greeks have a share of 8,000 tons in the market while the share of the foreigners in Turkey is currently 15 percent. This rate might reach at 25 percent in one year, Özder said.

A market worth $1 billion

Fishery Products Law should be introduced as soon as possible, said Sinan K?z?ltan, chairman of Aegean Livestock Fishery Products Exporters' Association. “We no more want to be a sector managed by 30 different laws. We promised to the European Union in 1999 that we would establish Directorate General of Fishery Products.” The sector provides employment for 10,000 people in Aegean Region, and indirectly to 30,000 people. The total size of the sector has reached $1 billion, K?z?ltan added.