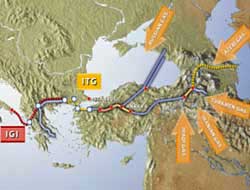 The Turkish and Greek prime ministers will this summer inaugurate a new pipeline bringing natural gas from Azerbaijan and other Caucasus producers, the Greek development minister said on Saturday.

The Turkish and Greek prime ministers will this summer inaugurate a new pipeline bringing natural gas from Azerbaijan and other Caucasus producers, the Greek development minister said on Saturday.

Stretching over 300 kilometres (186 miles), the pipeline is due to start bringing natural gas to European countries this summer.

It is subsequently planned to extend to southern Italy, with work on an additional stretch running 220 kilometres (140 miles) underwater and overland across Greek territory due to begin next year.

A tripartite agreement between Greece, Turkey and Italy to extend the pipeline will be signed in the coming months, NET said. The pipeline extension is scheduled to be ready by 2011.

Sioufas was in Ankara for talks with Turkish Energy Minister Hilmi Guler.

"We discussed the connection of electricity networks between Turkey and Greece, an ongoing project that we hope will be completed on our side by January 2008," he said.

Greece is seeking alternative electricity providers after the shutdown of two Bulgarian nuclear reactors at the power plant of Kozloduy sharply cut energy imports from that country.

"We are still 35 percent lower in terms of reserves than last year, but this is not a cause for concern," the Greek energy ministry's general secretary Nikos Stefanou told NET.

This news is a total 1147 time has been read