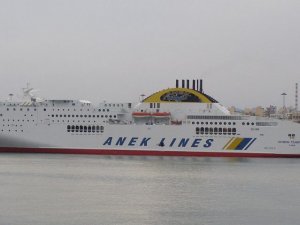 A Greek ferry returned to the port of Igoumenitsa in Greece with over 600 people aboard after a fire started aboard the vessel.

According to the Hellenic Coast Guard, the fire started in the garage section of the 2000-built ferry Olympic Champion shortly after it departed the port en route to Venice.

The ship, operated by Anek Lines, docked at the port where it was evacuated.

At the time, there were 538 passengers, 79 crew members on board, along with 293 vehicles. Two passengers were transported to a hospital after they suffered respiratory system problems.

The coast guard noted that there were no reports of pollution following the fire, adding that an investigation into the causes of the incident was launched by relevant authorities.

This news is a total 569 time has been read
Tags: fire, Greece, Greek ferry, Olympic Champion