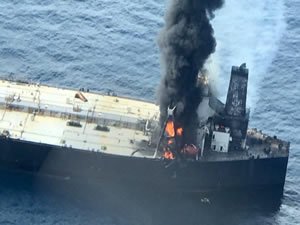 The captain, Sterio Ilias, pled guilty to two charges regarding the oil spill caused by the fire onboard the ship last month that killed one seafarer and the failure to report the fire in violation of Sections 26 and 38 of the country’s Marine Environment Pollution Authority (MEPA) Act.

On paying the fine, the captain is allowed to leave the country.

The laden 20-year-old ship tanker suffered a boiler explosion in its engine room while east of Sri Lanka, sparking a large salvage operation to douse the ship.

The vessel is now under tow to Fujairah in the United Arab Emirates where its cargo will be discharged and the charred vessel will be assessed for repairs.

The ship’s owner, New Shipping, has already paid Sri Lankan authorities a fine for the accident.

This news is a total 1552 time has been read
Tags: Greece , Seafarers , Sri Lanka