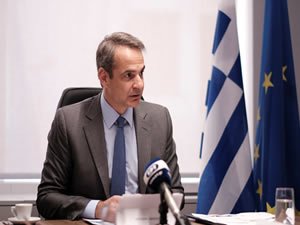 The European Union is set to soften its sanctions package on Russian oil exports after a weekend of wrangling, though it aims to keep a key shipping provision that will hinder Moscow’s ability to export its crude.

The bloc will drop a proposed ban on EU-owned vessels transporting Russian oil to third countries, according to documents seen by Bloomberg and people familiar with the matter. Critically, a prohibition on insurance is still in the works and would remain a significant impediment to exports. Greece, whose economy is heavily reliant on shipping, was among the member states that pushed the provision on exporting to third countries to be dropped from the EU’s sixth package of sanctions over Russia’s invasion of Ukraine, the people said.

The lack of a single position among Group of Seven nations was central to the proposal being dropped. The measure would have further dented Moscow’s exports — a vital source of hard currency — especially given that Greeks own more than a quarter of the world’s oil tankers by capacity.

But current proposals will nevertheless make life considerably harder for Moscow, assuming they are adopted. The ban on providing insurance would span the vast majority of the global fleet of oil tankers seeking to transport Russian barrels.

Tanker companies insure their vessels collectively against risks including oil spills. Through an over-arching organization called the International Group of P&I Clubs in London, vessel owners collectively purchase cover from 80 reinsurers, including from more than 20 of the 25 largest providers in the world.

As such, an insurance ban would make it all but impossible to obtain such cover given how many reinsurers are European, according to a senior lead underwriter directly involved in the trade.

The International Group’s members sort out cover for 95% of the tanker fleet for spills and other maritime liabilities.

If they could no longer do so, then it would force Moscow or its buyers to come up with alternative arrangements at a time when Russia is already being heavily sanctioned. EU countries are still debating the sixth package, with diplomats trying to overcome objections from Hungary to a proposed ban on Russian oil.

They were unable to reach a deal over the weekend. In its initial proposal, the EU had planned to prohibit the transportation, including through ship-to-ship transfers, to third countries of crude oil and petroleum products that originate in Russia, or have been exported from Russia.

That has now been dropped. The EU’s executive arm is also proposing to ban European companies from providing services, including insurance, that are needed to transport Russian oil anywhere in the world.

That provision is expected to stay, despite a reluctance from some member states, the people said. Discussions are ongoing and measures could change by the time they are approved by all 27 countries. Under the current proposals, the ban will fully exempt goods that don’t originate in Russia even if they transit through the country. That would free up oil from Kazakhstan or other third countries.

The EU’s proposal seeks to ban crude oil imports into the bloc over the next six months and refined fuels by early January.

European companies would be barred from providing “technical assistance, brokering services, financing or financial assistance or any other services related to those prohibitions.”

Shipping Bottleneck The EU had offered Hungary and Slovakia until the end of 2024 to comply with the measures and the Czech Republic until June of the same year since they are heavily reliant on Russian crude. Bulgaria was also seeking a similar transition period, the people said.

The EU had hoped to reach an agreement on Sunday to align with a G-7 announcement to phase out Russian oil, ahead of Moscow’s Victory Day parade, which earlier on Monday commemorated the Soviet Union’s defeat of Nazi Germany in World War II.

The people said Hungary’s stance wasn’t political and that Budapest was seeking technical assurances that would guarantee its energy security given how reliant the country is on Russian supplies.

Hungarian Prime Minister Viktor Orban has said that his country needs more time and investments to make the transition. Diplomats remain confident that an agreement can be reached in the coming days.

One of the people said that, as well as the importance of supplies from Kazakhstan, guarantees on the investments needed to finance the transition away from Russia, are also central to the discussion — including for infrastructure in Croatia.

The ongoing haggling over oil has meant that the rest of the measures the EU has proposed as part of its sixth suite of sanctions are also in limbo.

Other measures steps include cutting more Russian banks off the international payments system SWIFT, including Russia’s largest lender Sberbank; restricting Russian entities and individuals from purchasing property in the EU; and a ban on providing consulting services to Russian companies.

In the round, the full range of currently proposed measures will still likely restrict Russian sales of crude and fuels.

This news is a total 509 time has been read
Tags: greece , russia sanctions , Ukraine crisis