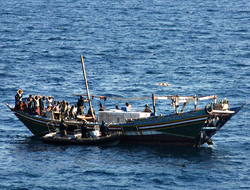 Security forces in northern Somalia's Puntland region seized two Greek fishing vessels after a gun battle on Thursday and accused them of fishing illegally in its waters. However, the fisheries minister of the semi-autonomous Puntland region, Mohamed Saleh, contradicted the coastguard boss and said the two Greek vessels did have valid fishing licences, and that he had asked the coastguard not to attack the ships.

Abdiweli Ali, the head of the Puntland coastguard, told reporters his men had been carrying out a routine check off the Horn of Africa before one of them was injured in the shoot-out at sea.

"We wanted to know the legitimacy of these two ships, but as we approached they opened fire on us," Ali said. "We defended ourselves. One of our soldiers was injured. Their fishing licences were expired, and that is why they fought us."

The Greek ships were brought to the port of Bosasso, witnesses said, but reporters were stopped from taking pictures of them. Their names and the identities of their crews were unclear.

"The captain of one of the ships called us when they were surrounded," Saleh said. "I told the coastguard not to attack ... But they turned a deaf ear and captured the ships."

Foreign navies have rushed warships to the perilous Gulf of Aden off Somalia in recent months to guard the busy shipping lanes that link Asia to Europe through the Suez Canal.

While the number of successful pirate hijackings this year has fallen from a year earlier, there are near daily attempts. Two European-owned tankers were seized within 24 hours late last month and are believed to be heading to Somali coastal havens.

Earlier on Thursday, the Seychelles military said it had deployed security forces on the outer islands of its archipelago after a second vessel flying the Indian Ocean nation's flag was seized by Somali pirates.

This news is a total 693 time has been read