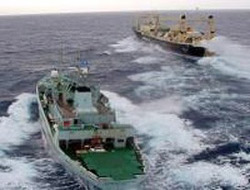 When the Esperanza caught up with the Japanese fleet early today after a 10-day search, the whalers immediately sailed away pursued by the Greenpeace vessel, according to the statement on the Web site.

As long as the whaling ships are being chased they cannot hunt, it added.

'If they try to start whaling, the Esperanza international crew of activists will take non-violent direct action to prevent the Japanese government's slaughter of nearly 1,000 whales,'' Greenpeace said.

The Japanese fleet has a plan to kill almost 1,000 minke and fin whales in Antarctica.

In December the government dropped plans to also kill as many as 50 humpback whales after pressure from Australia, New Zealand, the U.S. and European Union.

Japan says its whaling cull is necessary research, aimed at establishing that cetacean populations have recovered sufficiently to allow a return to commercial whaling that's been banned worldwide since 1986.

Research whaling is allowed under the terms of the moratorium imposed by the International Whaling Commission of which Japan is a member.

A Greenpeace radio transmission to the whaling fleet in English and Japanese said modern research did not require the animals to be killed, calling the scientific justification "a hoax,'' according to the Web site.

A legal panel commissioned by the International Fund for Animal Welfare said in a report last year that Japan's whaling is "primarily for commercial purposes'' and "plainly constitutes international trade.''

This news is a total 1305 time has been read