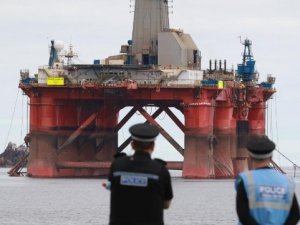 Scotland's highest court has fined Greenpeace UK $100,000 for interfering with the operations of the Transocean floater Paul B. Loyd Jr. in the UK North Sea in June 2019.

The sentence for the contempt of court charge could have been heavier, as the available penalties could have included a jail term for Greenpeace UK's leaders.

On June 9, 2019, Greenpeace UK activists boarded the Paul B. Loyd Jr. in Cromarty Firth, Scotland and occupied it for several days. During the occupation, Transocean obtained an injunction against Greenpeace in Scottish courts to block further interference with the rig's operations. Greenpeace admittedly violated that injunction twice, putting two activists on board the rig on June 14 and attempting to board a second time on June 16. 14 people (including three photographers) were arrested in connection with the series of direct actions.

In her ruling, Judge Lady Wolffe of Scotland's Court of Sessions said that she had no doubt that Greenpeace UK's senior leadership had been closely involved with the operation from the beginning. However, in an act of "leniency," she imposed a fine on the organization and did not penalize individual members.

Greenpeace UK has launched a fundraising appeal to cover the cost of the fine. Every donation up to $50,000 will be matched one-to-one, according to the organization.

"When Greenpeace learned about BP’s plans to drill for new oil, we knew we had to take action. If oil companies are allowed to continue with business as usual, the whole world loses out," the organization wrote in an appeal.

The ruling comes as Greenpeace launches a new civil suit against BP in British courts. Greenpeace claims that BP's lease at the Vorlich field should be invalidated because its development would have a negative effect on the climate. The suit contends that the UK government has a legal obligation to consider climate effects when awarding lease agreements.