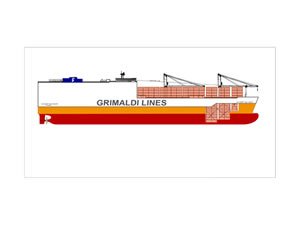 The Grimaldi Group has signed an agreement worth over $500 million with Ulsan-based Hyundai Mipo Dockyard for the construction of six new Ro/Ro multipurpose vessels.

With a length of 250 meters, a beam of 38 meters, and a deadweight of 45,684 tonnes, the ships will be an evolution of the previous G4 class, built by the same shipyard and delivered to the Grimaldi Group between 2014 and 2015.

Compared to the previous G4-class vessels, the new units will have the same capacity for rolling freight while container capacity will double.

Grimaldi said that the design is the result of a careful study of the needs of the group and its customers.

Both the main engine and the auxiliary diesel generators will meet the NOx levels imposed by the Tier III regulation, while the integrated propulsion system between rudder and propeller will minimize vortex losses, optimize propulsive efficiency and reduce fuel consumption.

The ships will be designed for shoreside supply of electricity at berth.

Furthermore, the electrical consumption of on-board machinery will be reduced thanks to the installation of variable frequency drive devices, while the application of innovative low friction paints will reduce the hull resistance, according to Grimaldi.

Finally, the ships will be equipped with hybrid exhaust gas cleaning systems for the abatement of sulphur and particulate emissions.

The G5-class units will allow a reduction of CO2 emissions per tonne transported of up to 43% compared to other Grimaldi multipurpose ro/ro ships, Grimaldi claims .

“The new series of ro/ro multipurpose G5-class ships was designed to respond even more efficiently to the demand for quality transport services on deep sea routes, reconciling the needs related to international freight traffic with that of protecting the environment”, said Gianluca Grimaldi, President of the Neapolitan Group.

The six ships are expected to be delivered between the first months of 2023 and the end of 2024.

The new units will replace older ships of the group which will have reached an age of 25, and will be deployed between North Europe and West Africa, particularly to Lagos (Nigeria).

This contract strengthens the relationship between the Grimaldi Group and Hyundai Mipo Dockyard which will build a third consecutive class of Ro/Ro multipurpose vessels for the Neapolitan group.

This news is a total 5843 time has been read
Tags: Grimaldi Group , Hyundai Mipo Dockyard