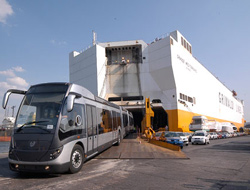 The ?gigantic vehicles? in the ongoing metrobus project meant to solve Istanbul?s traffic problem are being transported to Turkey on Grimaldi Lines.

The ?gigantic vehicles? in the ongoing metrobus project meant to solve Istanbul"s traffic problem are being transported to Turkey on Grimaldi Lines.

The 26-meter metrobuses that will alleviate the congestion in Istanbul"s traffic are being brought to Turkey by Grimaldi Lines, which is represented in Turkey by Egekont. With its multi-purpose transportation vessels, Grimaldi Lines has the world"s largest and most developed fleet for Ro-Ro, container and general cargo freight.

Grimaldi Lines was named the ?Ro-Ro Line of the Year? by Lloyd"s Loading List, a repeat of last year"s success, and has won the award more than any other shipping company. The metrobuses are being transported in groups of 2, 3 and 5 on Grimaldi Line"s large capacity vessels. Manufactured by the Dutch firm VDL, the vehicles are loaded at the Antwerp port in Belgium and arrive at the port of Izmir in with a transit time of 10 days.

The 55 vessels in the Grimaldi Lines fleet, some of which are leased , transport an average of 1 million vehicles a year on regular routes between North America, the Mediterranean, Central and West Africa and South America. The company has scheduled services to Turkish ports, especially for finished automotive shipments. 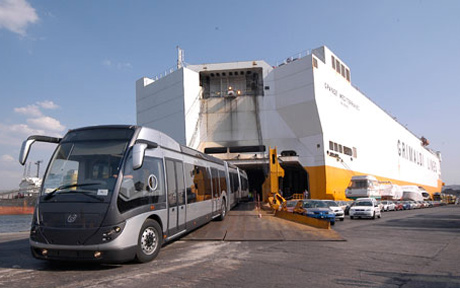 The first phase of the metrobus project, which aims to provide quality mass transportation and solve the transit problems on the European shore in Istanbul, was launched between Avcılar and Topkapı. The second phase of the line, including Topkapı-Mecidiyeköy, Mecidiyeköy-Kozyatağı, Edirnekapı-Vezneciler, Kabataş-Beşiktaş, Beşiktaş-Levent and Aksaray-Bağcılar is scheduled for completion by the end of the year.

The metrobuses are capable of carrying 350 passengers and boast the first hybrid system in Turkey. They also allow height to be adjusted manually so that the handicapped can travel more comfortably. Powered by diesel and electricity, the environmentally-friendly vehicles provide fuel savings of 40% and require fewer drivers than buses on the same line.

This news is a total 2456 time has been read