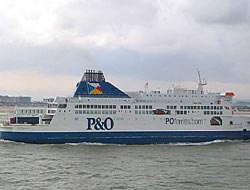 The report of the passenger ferry Pride of Canterbury, which grounded on a charted wreck on 31 January 2008 has been published.

The report of the passenger ferry Pride of Canterbury, which grounded on a charted wreck on 31 January 2008 has been published.

While sheltering off the port of Dover in bad weather conditions, the passenger ferry Pride of Canterbury, with 275 passengers and 101 crew on board, grounded on a charted wreck. She sustained major damage, including the total loss of her port controllable pitch propeller hub and a section of tail shaft.

Pride of Canterbury was on a fixed service between Dover and Calais, and the occasional closure of either port was a feature of the run, especially during winter months. P&O Ferries,the operator of Pride of Canterbury, had produced comprehensive passage plans between ports served by the vessel. In addition, there was a selection of plans for other probable sea passages. However, there were no contingency plans produced that suggested where Pride of Canterbury should wait in the event of a closure of one of the regular ports.

On this occasion, Dover port closed just before Pride of Canterbury arrived within port limits.

Consequently, she proceeded towards the master"s preferred holding area, which was ?The Downs? off Deal, Kent, to await the port reopening. ?The Downs? area is quite restricted in the available sea room and surrounded by shallow waters and banks.

? No passage plan was developed; dangers and hazards were not identified; and no-go areas were not marked on the chart.

? On board Pride of Canterbury, paper charts were the primary means for navigation. However, positions were only sporadically plotted and the paper chart was not consulted at the crucial time.

? The OOW was changed on an ad-hoc basis, and the handovers were not structured, such that important information might have been lost.

? Navigation was conducted by eye and by reference to an electronic navigational chart display (ENC). None of the bridge team had been trained in the use of ENC, and the settings were inappropriate such that key dangers would not have been displayed.

? Throughout the waiting period, there were a number of telephone calls to the bridge, principally regarding matters on the vehicle decks, which distracted the bridge team from their primary function of navigation and lookout.

? Charts covering likely contingency waiting areas should be prepared and be ready for use before the start of the voyage, and they should include clearly marked dangers and hazards.

? The principles of effective bridge team management should be understood and practised by bridge teams at all times.

? When additional aids to navigation, such as electronic navigational systems, are fitted to the vessel, the operators should be given effective training in the use and limitations of the equipment, even if the equipment is not intended to be the primary means of navigation.

? Where navigation bridges are the focus for frequent requests for non navigationalrelated information, systems should be in place to ensure that watchkeeping staff are not distracted at critical times.

This news is a total 7494 time has been read