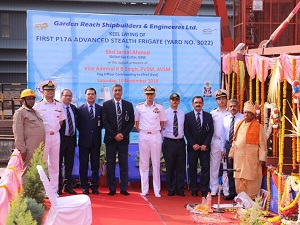 Indian shipbuilder Garden Reach Shipbuilders and Engineers Limited held a keel-laying ceremony for their first Project 17A in a ceremony in Kolkata on November 10.

The keel-laying ceremony marked the official start of construction of a new class of frigates which will be a follow-on on the Project 17 (P17) Shivalik-class already in service with the Indian Navy. A total of seven frigates will be built by Mazagon Dock Shipbuilders Limited (MDL) and GRSE under a contract signed in February 2015. Each of the seven frigates is projected to cost close to US$900 million.

MDL held a keel-laying ceremony for their first Project 17A ship in December 2017.

At US$2.6 billion, the contract for construction of three “Advanced Stealth Frigates” is the largest ever order won by the company, GRSE said. The first GRSE-built frigate is expected to be delivered in 2023 and the next two ships in 2024 and 2025, respectively.

P17A frigates will measure 149 meters in length and displace approximately 6,670 tons. They will be capable of reaching a top speed of 28 knots and will carry Barak 8 long range surface-to-air missiles and BrahMos supersonic cruise missiles.

India has also contracted Italian shipbuilder Fincantieri to provide support to the two Indian shipbuilders. The support entails the development of integrated building in the two yards. This includes design optimization processes and modular construction; training and ongoing technical assistance for every stage of design till delivery.