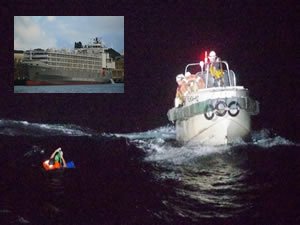 The owners of the sunken Gulf Livestock 1 will not help finance any further search and rescue efforts for the missing 40 crew from the ship which went down in a typhoon off southern Japan 42 days ago.

Via crowdfunding sites the families of the missing have managed to mount their own search missions in southern Japan in recent weeks after the Japan Coast Guard (JCG) scaled back its own search operations.

Just three men from the livestock carrier were found in the wake of the accident, one of whom subsequently died.

The missing 40 men from the Gulf Navigation ship are a mix of Filipinos, New Zealanders and Australians.

The privately funded search campaign has yielded some hopeful results with Splash reporting on October 8 how debris including lifesaving equipment similar to that onboard the sunken livestock carrier had been found on remote islands in the East China Sea.

The two living survivors from the disaster have recounted how four liferafts were deployed and all crew had donned their lifesaving equipment as the ship lost power and was battered by waves before capsizing.

With funds for more private flights drying up the families have asked the governments of the the Philippines, Australia and New Zealand to assist as well as calling for the shipowner, Gulf Navigation, to aid further search efforts in an area where there are many uninhabited Japanese islands.

Gulf Navigation has said it will not assist further to find the missing men.

“While the Owner said it had initially looked to charter a SAR vessel, it believed the right decision was to encourage the JCG and other Counties (sic) in the area to continue their extensive search efforts as they had both the knowledge and equipment required and were on the spot.”

This news is a total 1210 time has been read