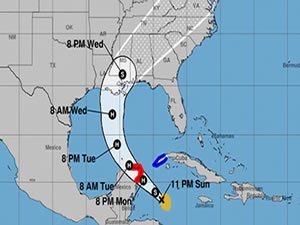 The Gulf of Mexico's oil and gas industry is set to weather yet another tropical storm - Zeta, the 27th named storm of the season.

If the forecast from the National Hurricane Center holds, Zeta will pass near or over the Yucatan Peninsula and sweep through the central Gulf of Mexico as a Category 1 hurricane.

Typical precautionary measures for a hurricane-force storm include offshore platform evacuations and rig shutdowns, and the Gulf offshore industry has already experienced several rounds of shut-in and startup this season.

The storm is forecast to be at or near hurricane strength when it approaches the northern Gulf Coast region, and there is a risk of another round of storm surge, rainfall and high winds between Louisiana and the Florida Panhandle. Forecast trackline projections are centered on the Louisiana coastline.

If they prove accurate, Zeta would be the fifth named storm to arrive in the state this year - a new record. The western portion of Louisiana has been especially affected, with Hurricanes Laura and Delta arriving in the Calcasieu Lake region roughly one month apart.

Zeta would also be the 11th named storm to make landfall in the United States in a year, another new record. "It is unfortunate we face another tropical threat this late in a very active season.

We must roll up our sleeves, like we always do, and prepare for a potential impact to Louisiana," said Louisiana Gov. John Bel Edwards in a statement.

"As we’ve seen this hurricane season, a tropical threat during the ongoing COVID-19 emergency is challenging, but something we can handle."

The U.S. Coast Guard has warned the region's maritime community to exercise caution and to prepare for port closures along the Gulf Coast.

Due to previous storm damage, "the possibility for debris to resurface during Zeta could pose a danger to mariners," the USCG warned.