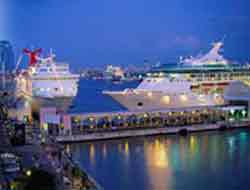 Pakistan's first deep seaport will be inaugurated on Tuesday to serve as a strategic storage, transit facility and a regional hub for major trade activities, along some of the busiest sea-lanes in the region.

Pakistan's first deep seaport will be inaugurated on Tuesday to serve as a strategic storage, transit facility and a regional hub for major trade activities, along some of the busiest sea-lanes in the region.

The Gwadar Port, located at the entrance of the Gulf and about 460 kms west of Karachi, is close to the Strait of Hormuz and strategically located near the oil-rich Middle East, the most populous South Asia and the resource rich Central Asia.

Minister for Ports and Shipping Babar Gouri told APP that first cargo ship had arrived at the port on Monday while two others would berth at the port by Tuesday.

He said first phase of Gwadar Port had been completed, while the second would be constructed in the next five years.

Mother vessels from US, Europe and the Far East would be able to discharge cargoes destined for Dubai and Karachi at the port for onward despatch through feeder vessels.

This would save a lot of time and cost for ships coming to the area.

The Gwadar Port will give a new lease of life to shipping activities in the country.

The operation and management of the port was recently handed to the Singapore Port Authority (SPA) under a 40-year agreement between the Gwadar Port Authority (GPA) and the Concession Holding Company (CHC) -- a subsidiary of the SPA which is operating 22 ports in 11 countries, and will invest $550 million in next five years.

The Gwadar Port can currently handle Bulk Carriers of up to 50,000 DWT through its three berths.

A five-km long channel, 14.5 metres deep and being close to the shipping lanes, the cargo ships will spend lesser time entering and leaving the port.

The port will not only promote trade and transport with Gulf states, but will also provide tans-shipment of containerised cargo, unlock the development potential of hinterland and will become a regional Hub for major trade and commercial activities.

This news is a total 1153 time has been read