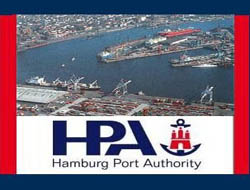 The port of Hamburg handled record-high 140.4 million tonnes of cargo in 2007, an increase by 4.1 percent year-on-year.

The port of Hamburg handled record-high 140.4 million tonnes of cargo in 2007, an increase by 4.1 percent year-on-year.

The result was boosted by the rapidly increasing cargo business with growth markets in the Far East and eastern Europe. The port's container traffic rose 11.6 percent to 9.9 million TEUs.

Unlike other northern European ports, including Bremen, Rotterdam and Antwerp, the container traffic at the Hamburg port continued to improve with its market share rising to 26 percent from 22 percent, traditionally fuelled by the business with China.

Russia, Finland, Sweden, Poland and the Baltic countries counted to the port's biggest trade partners. The trade with India grew 48 percent year-on-year in 2007.

In 2008, Hamburg's container traffic is seen at around 10.8 million TEUs with a total of 146 million tonnes of goods.

This news is a total 1738 time has been read