Hanjin is in ECSA-N Europe 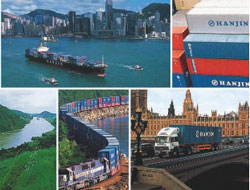 Hanjin and Argentine outfit Maruba have joined the new joint service that has begun operating between the East Coast of South America (ECSA) and northern Europe.

Hanjin and Argentine outfit Maruba have joined the new joint service that has begun operating between the East Coast of South America (ECSA) and northern Europe.

South Korean carrier Hanjin and Argentine outfit Maruba have joined the new joint service - including CMA CGM, Hapag Lloyd and Hambug Sud - that has begun operating between the East Coast of South America (ECSA) and northern Europe. Both are hoping that a cut in capacity (by a weekly 1300 TEU) created by three slings merging into two will help slash costs.

Already Hanjin has announced on this route that it is implementing a Fuel Recovery Charge ? of USD$73 per TEU and USD$146 per FEU orthbound and USD$55 and USD$110 southbound ? to combat ?rapidly increasing fuel costs?.

Hajin is a slot charterer in the new setu up under the umbrella of CMA CGM and will not provide a vessel to the new two-sling operation, but Maruba will provide one vessel, the Maruba Maximus.

Hanjin was a member of the old SAFRAN service, which is now being merged with the Brazil Express and SAECS services previously operated, respectively, by Hamburg Sud and Hapag Lloyd.

Gustavo Krause, the Maruba line manager for the ECSA to North Europe trade, said that the recent rationalisation will allow all carriers to bring up ?incredibly low? rates back towareds sustainable levels. He told SAO that rates were currently as low as USD$500 northbound and Euros 50 plus bunkering charges southbound. A year ago the Maruba manager said that rates from Buenos Aires to a UK or European base port could fetch $3300 per FEU and that has now fallen to between $1600 and $2000 per FEU. He added: ?Now that we have taken out of the weekly equation about 1,300 TEU, we can think about rate rises. This rationalisation should bring the rates up and i think we and our partners can save a lot of money with it.?

Hanjin and the other carriers in this trade are hoping to implement a $250 per TEU general rate increase, but may have to start with $100 per TEU, as shippers" are resisting the rises.

Additionally Hanjin has introduced a rate restoriation programme on the Europe to North America route ? from September 1 ? and will ask for an extra USD$150 per TEU and $225 per FEU, in both directions. The company stated that despite ?continuous efforts to reduce costs, this rate restoriation is inevitable in order to maintain quality service to our customers under the current economic climate?.

This news is a total 1895 time has been read