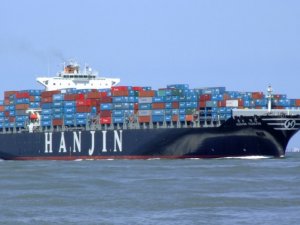 You don’t normally get advance warning of an attempt to put a company over a barrel and call in bankruptcy lawyers.

You don’t normally get advance warning of an attempt to put a company over a barrel and call in bankruptcy lawyers. Using forced bankruptcy as a means to oust bad business owners or managers is a risky undertaking and plotters usually keep their schemes very secret. Is it surprising then, that the Korea Development Bank, who for months kept telegraphing how supportive it was of Hanjin’s efforts to right itself, suddenly says “Pardon me, but the parent is not pitching in their own money, so we are packing up and see you in court”.

South Korea is hardly a perfect setting for a tale of shipping intrigue, having the bank long stand by its two major carriers, Hanjin and Hyundai Merchant Marine (HMM), and by the shipbuilding and ship servicing industries behind them. But it is intriguing, that the bank stood by, while the teams representing both carriers were pitching to them identical sets of strategies aimed at reducing the debt obligations and battening the hatches to preserve cash in light of rapidly falling trade volumes and the vicious downward spiral of container rates. It is intriguing that the bank group stood by when the carriers were chaotically shedding their more profitable bits to preserve the cash-draining business of container shipping. And it is intriguing that, confusingly to everybody in the market, the bank kept fuelling the hope by rescheduling its own loans to the carriers and appearing to be ready to step in with more financial support.

The market could have been told much earlier that all of this was just about getting the owner to throw more of their own cash in. It would have spared a lot of management expenses to the charterers who went through a slow capitulation process on charter rates, and to all debtor institutions who spent time and money negotiating Hanjin’s debt obligations.

Would the owner throwing their own money into the business work? I doubt it. Earlier on, in a very similar situation, the owner of HMM threw in KRW30bn ($24m at that time) of her own fortune, only to be ousted from the chair’s post shortly after. That move only demonstrated the futility of throwing more fuel on a fire burning out of control.

Could it have been that all the debt’s owner wanted was a different management team, thus a different management strategy? If it was, the market could have been told much earlier that this was about perceived lack of management prowess. Kind of doubtful, as the management teams did not consist of people living only in the good times of the container shipping business. Amongst the managers in both companies, there are plenty of long timers, who had experience of good times and bad times, thus enough expertise to act in either set of economic circumstances. If the tactical and strategic decisions were not entirely made by their seasoned teams, it would be great to let the market know where all important management decisions regarding Hanjin and HMM were made. That way, everybody could have had an equal chance in assessing the probability of recovery versus probability of default.

What would be the consequences to the global trade of pushing Hanjin into bankruptcy? Hanjin’s fleet consists of about 37 own vessels and about 51 charters, all of them carrying containers of allied carriers and non-alliance partners under the slot sharing agreements that have to be kept as not to jeopardize anybody’s standing with their own customers. The bankruptcy dramatically increases the possibility of detention of vessels in ports around the world, thus throwing into doubt recovery and delivery of cargo stored on those vessels. It will make everyone wary of selecting Hanjin as a carrier, no matter how attractive their rates could be. On the other hand, capacity of about 90 vessels becoming unavailable to the market is not something that can be easily ignored by the companies depending on shipping their containerized goods overseas. It will affect their routes to markets, their efficiency, and their financial and business plans.

Needless to say, this bankruptcy is in nobody’s best interest, even though some competitors may be already rubbing their hands in Schadenfreude-like satisfaction.

This news is a total 19066 time has been read
Tags: Hanjin Shipping and the futility of throwing more fuel on a fire burning out of control, turkıshmaritime