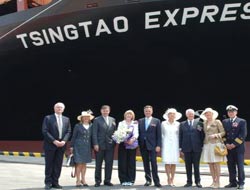 The TSINGTAO EXPRESS, named in the Port of Qingdao, is the second newbuilding that Hapag-Lloyd has integrated into its fleet in 2007. Five more vessels will follow until 2008. The Hamburg-based shipping line now has a globally deployed fleet comprising about 140 ships capable of transporting a total of over 467,000 boxes.

The TSINGTAO EXPRESS bears the old name of Qingdao, by which the city is also still known in Europe today. “With the ship’s name, we are emphasizing the significance of the Chinese port city for the past, present and future of world trade and our shipping line,” explained Michael Behrendt, executive board chairman of Hapag-Lloyd AG, in his speech at the naming ceremony. “Hapag-Lloyd has traditionally close ties with Qingdao: vessels of our shipping line have been calling at the port of the city for over hundred years. Today we run seven liner services with weekly departures.”

The TSINGTAO EXPRESS will be deployed in the context of the Grand Alliance. In the Europe-Asia liner service, she will call at the ports Singapore, Kaohsiung, Pusan, Dalian, Xingang, Qingdao, Shanghai, Ningbo, Port Kelang and Jeddah, as well as Rotterdam, Hamburg and Southampton. She can complete a round voyage in 63 days.

“With the new ship, Hapag-Lloyd is responding to the economic growth in East Asia,” stated Adolf Adrion, executive board member of Hapag-Lloyd AG, in his naming ceremony speech. “China is the engine of the world economy and globalisation, and thus also drives ocean shipping, which accounts for 90 percent of world trade.”

The new giant containership has a length of 335m and a width of 43m. The vessel can carry 8,750 standard containers and has 730 reefer plugs. Hapag-Lloyd has a total of 65,000 refrigerated containers, making it no. 2 in this segment worldwide.

The ship was ceremoniously named in the presence of 150 guests from Asia, including the German ambassador in Beijing, Dr. Volker Stanzel, and representatives of the builders Hyundai Heavy Industries. The patron is Vibeke Larsen, wife of Kurt K. Larsen, CEO of the Danish forwarder DSV, which is one of the market leaders in Europe and for whom Hapag-Lloyd is an important partner for overseas shipments.

This news is a total 2128 time has been read