Hapag-Lloyd More Than Doubled Its Profit 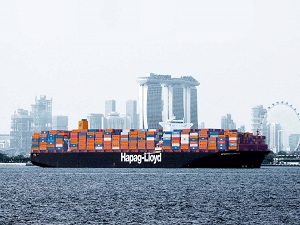 German container carrier Hapag-Lloyd more than doubled its bottom line in the third quarter compared to the same period last year. "We remain cautiously optimistic for the rest of the year," says CEO Rolf Habben Jansen.

German shipping group Hapag-Lloyd expects an increase in transport volumes to last for the remainder of 2018 after volume growth and a modest recovery in freight rates helped push operating profits 12 percent higher in the first nine months.

Shipping is only slowly recovering from an oversupply of vessels that plunged the sector into an almost decade-long slump, forcing some players out of business and others to combine forces to seek economies of scale.

Hamburg-based Hapag-Lloyd deepened cost cuts in the first half when it posted disappointing results, having been set on a better course in 2017 when the merger propelled it into the top five world container firms. Operating profit before interest and tax (EBIT) amounted to 212.1 million euros after 178.1 million a year earlier in the July-Sept period, and to 300.8 million in the nine months versus 268.8 million.

Net profit in the nine months was 12.5 million euros after 9.1 million in the same 2017 period. Transport volumes increased by 26.6 percent to 8.9 million twenty foot equivalent units (TEU) in January-September. Habben Jansen said the peak shipping season this year had started in July/August and was lasting, while in 2017, it had started in May.

Freight rates, on a pro forma basis and when compared to the combined business of Hapag-Lloyd and UASC, were 1.5 percent higher year-on-year in the nine months, Habben Jansen said. Without the adjustments he cited, they had dropped 3.4 percent to $1,032 per TEU. High costs of bunker or shipping fuel were major worries, he said. These increased by 31 percent to an average $406 per tonne in January-September, driven by high crude oil prices.

“I expect oil to remain in a $70-80 per barrel range, therefore there will be no price relief for bunkers,” Habben Jansen said. Hapag-Lloyd upheld an adjusted June forecast for earnings before interest, tax, depreciation and amortisation (EBITDA) coming in between 900 and 1,150 million euros and for EBIT in a target corridor of 200-450 million euros. Both should be in the upper part of the ranges, it said.