Hapag-Lloyd Ships Will Not Use Arctic Sea Routes 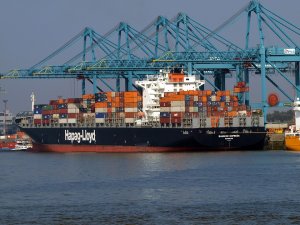 German shipping major Hapag-Lloyd will not use the Arctic shipping passages which are now open as the sea ice in the Arctic is melting.

“Hapag-Lloyd does not use the Northwest Passage or the Northeast Passage as shipping routes right now, nor are there any plans to do so in the future,” Jörg Erdmann, Senior Director Sustainability at Hapag-Lloyd, pointed out.

With its stance on the possible route through the Arctic, the German carrier joins French container shipping company CMA CGM. In August, CMA CGM said that none of its 500 vessels would use the Northern Sea Route along Siberia as it would represent “a significant danger to the unique natural ecosystems”.

“The particles produced by the combustion of carbon-based fossils and fuels contribute to global warming, which can in turn harm our ecosystems. As long as there are no guarantees that these passages can be navigated without negatively impacting the environment, using them is out of the question for Hapag-Lloyd, as well,” Erdmann explained.

According to Erdmann, the significance of the above sea passages for container shipping is still limited as the window of time during which ships can navigate through the Arctic region continues to be relatively narrow. At present, it would be difficult to use these routes regularly.

“What’s more, since container ships operate in liner services, we must take a long and hard look at whether the time one might save from the shorter distances offered by using the Northwest Passage and Northeast Passage would result in genuine economic benefits, especially when taking into account the draughts of larger ships or the fact that ships would likely need to have the appropriate ice classes,” he continued.

“Thus, all things considered, the desirability of using these passages much be very carefully weighed from both the ecological and economic perspectives.”

With shipping routes across the Arctic being significantly shorter than the traditional ones, more and more shipping companies are investing in ice class vessels that are able to operate without icebreaking assistance.

At the beginning of September 2019, the first working meeting of the NSR Public Council was held at the 5th Eastern Economic Forum (EEF) in Vladivostok. During the meeting, Rosatom director revealed that about 80 million tons of goods is planned to be shipped annually via the Northern Sea Route by 2024.

This news is a total 291 time has been read
Tags: Arctic Shipping, Hapag-Lloyd, Northern Sea Route.