Hapag-Lloyd to apply for an aid 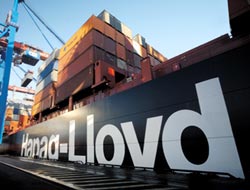 Hapag-Lloyd"s owners, Tui and the Albert Ballin consortium, are in talks about which of them would be prepared to give the line fresh capital.

?There is an ongoing discussion between the owners,? a source close to the situation said.

However, the carrier denied a newspaper report that it is already in talks with the government over financial aid.

?We did not apply for government aid,? said Hapag-Lloyd spokesman Klaus Heims. However, he added that all possibilities would be considered.

Additional capital provided by the owners is considered an essential condition for the line to be eligible for government aid. According to observers close to the owners, no decision has yet been taken.

Tui, which sold the majority of Hapag-Lloyd earlier this year, has already granted the company loan facilities of ?1.1bn ($1.5bn) to save the deal amid rapidly worsening market conditions.

Tui did not exclude helping the line with another loan, company sources said.

Hapag-Lloyd is in talks with the government over financial aid. A loan of up to ?300m, to be provided by government-owned bank KfW, is being discussed.

Hapag-Lloyd is in the middle of a major restructuring programme which will see the line cut costs by $700m this year. It is, however, seeking additional cost-cutting measures and has assigned management consultancy Roland Berger to identify them.

This news is a total 2782 time has been read