Hapag-Lloyd to upgrade its EMX service 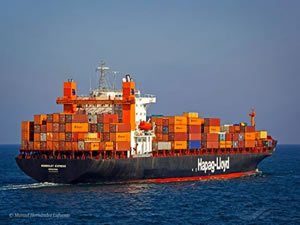 Hapag-Lloyd has announced it will restructure the East – Mediterranean Express (EMX) service in order to further enhance its North Europe-Mediterranean product.

As of early January 2021, the ports of Bremerhaven and Valencia will be added to the weekly rotation, according to an announcement from Hapag-Lloyd.

At the same time, the German carrier will deploy one more vessel into the service "in order to ensure high schedule reliability."

Overall, five container ships will be phased into the service, but their names have not been revealed yet.

The EMX will also offer competitive transit times and connectivity to the company's global mainline network via Hapag-Lloyd hub ports such as Hamburg, Antwerp, Piraeus and Istanbul, said the firm.

Liners turn to multipurpose tonnage to plug gaps in charter marketLiners are having to seek out multipurpose (MPP) ships to cope with extraordinary demand and sky high rates across container shipping tradelanes. Maersk Reports Quicker Rebound and Raises its OutlookA.P. Moller – Maersk supplied further evidence of the rebound the shipping lines are experiencing reporting a faster than expected recovery in the third quarter results and raising its expectations for its full-year results. MSC tipped to overtake Maersk at the top of the liner rankingsMaersk, the world’s largest containerline for the past quarter century, could soon lose its top spot on the global liner rankings list to its alliance partner, MSC. CMA CGM to Expand LNG-Powered Fleet to 26 VesselsContainer shipping group CMA CGM will expand its use of liquified natural gas (LNG) to 26 vessels, it said on Thursday, as part of efforts to reduce pollution in ocean shipping.