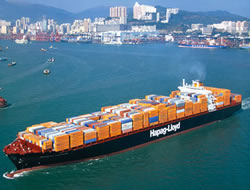 Hapag-Lloyd Overseas, a trusted name in international container transport, continues to generate alternative solutions by expanding its range of services for import and export shipments.

Hapag-Lloyd Overseas, a trusted name in international container transport, continues to generate alternative solutions by expanding its range of services for import and export shipments. The new service (that Hapag Lloyd Overseas) has started as part of this expansion is an important service aimed at the needs of industries in Kocaeli that want to connect with the Far East.

The dense industrial buildup and new investments in the Kocaeli region increases the demand for foreign trade from this region.In order to meet this demand, container transportation service provider Hapag-Lloyd Overseas has begun offering service as of April on a route from Izmit to Busan (South Korea) for industries that want to import goods from the Far East or export goods to that region. Automotive products are the primary type of goods being shipped on this line.

Offering service with 10 vessels
Hapag-Lloyd Overseas serves with ten vessels on this line, each with a capacity of 3,500 TEU. Shipments sent from Izmit reach Busan in 30 days via the following route: Izmit (Evyap)-Novorossiysk-Constanta-Istanbul-Haifa-Port Kelang-Shekou-Busan. Shipments sent from Busan reach Izmit in 35 days via the following route: Busan-Shanghai- Ningbo-Shekou-Port Kelang-Haifa-Izmit (Evyap).

With service offices and warehouses in the ports of Izmir, Istanbul, Mersin and Gemlik, Hapag-Lloyd Overseas also transports containers, including reefers, from Turkey directly to various destinations throughout the world such as ports in Europe, America and the Far East.