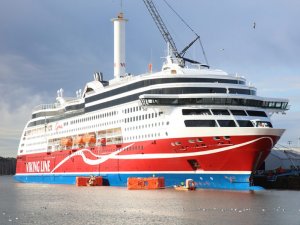 Finnish shipping line Viking Line has equipped its LNG-fueled Viking Grace with a rotor sail to help reduce the vessel’s environmental impact even more by harnessing the power of the wind.

The 57,565 GT Viking Grace, which has been in operation since 2013, is already considered one of the most eco-friendly cruise ferries in the world, but the addition of a rotor sail will help the vessel cut fuel consumption and reduce emissions even further when its begins wind-assisted voyages in the Baltic Sea between Turku, Finland and Stockholm, Sweden beginning on Thursday.

Developed by the Finnish company Norsepower Oy Ltd, the Rotor Sail Solution installed on the Viking Grace is a modernized version of the Flettner rotor; a spinning cylinder that uses the Magnus effect to harness wind power to propel a ship. The company first announced the project to install one of its devices aboard Viking Grace in January 2017.

While rotor sails have been in use on commercial ships before, the Viking Grace will be the first passenger ship in the world to be equipped with the technology.

The cylindrical rotor sail installed on the vessel 24 meters in height by 4 meters in diameter. As the rotor is spinning, the passing air will flow with a lower pressure on one side, creating a pressure difference that will propel the vessel forward.

Norsepower’s Rotor Sail Solution is already in commercial use on board the Bore’s MV Estraden, a 9,700 DWT Ro-Ro carrier, which has achieved a 6.1% reduction in fuel consumption through use of the rotor sails, according to Norsepower. The technology is fully automated, sensing whenever the wind is strong enough to deliver fuel savings, at which point the rotors start automatically.

Aboard the MS Viking Grace, the rotor sail will reduce the vessel’s carbon dioxide emissions by up to 900 tonnes per year, depending on the wind conditions, Viking Line says.

“For Norsepower, it’s an honour to be able to make the M/S Viking Grace even more environmentally-friendly by means of our novel rotor sail technology. The last traditional windjammers in the world were owned and operated by shipping companies based in Åland, so it’s fitting that Åland-based Viking Line should be a forerunner in launching modern auxiliary sail technology,” says Tuomas Riski, CEO of Norsepower.

In addition to the Viking Grace, Viking Line has also announced it will also utilize wind propulsion in the company’s new vessel, which is due for delivery 2020. Built in China, the passenger ship will be equipped with two mechanical rotor sails supplied by Norsepower.

This news is a total 1220 time has been read
Tags: Harnessing the Wind: ‘Viking Grace’ Becomes First Passenger Ship to Use a Rotor Sail for Wind-Assisted Proplusion