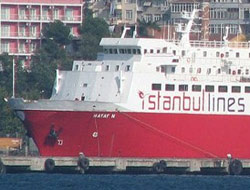 The 118-meter (390-foot) ferry "Hayat N" -- loaded with 73 trucks and two cars -- went down Sunday, shortly after leaving the northwestern port of Band?rma on its way to ?stanbul.

One dead, four missing after ferry sinks upon leaving port

Military divers on Monday searched for five truck drivers who were reported missing after a ferry with more than 100 people aboard sank in choppy waters in the Sea of Marmara, which separates the Aegean and the Black Sea.

One person died, four were reported missing and 34 injured in the accident. Some 90 people were either pulled out of the sea by the coast guard or by fishing boats or swam to shore, officials said Monday.

The 118-meter (390-foot) ferry "Hayat N" -- loaded with 73 trucks and two cars -- went down Sunday, shortly after leaving the northwestern port of Band?rma on its way to ?stanbul. The ferry listed to one side and then went down some 15 minutes after leaving the port at 11:30 p.m. (2030 GMT) on Sunday, authorities said.

Most of the passengers jumped into the sea, but authorities feared others may have been inside their vehicles when the ferry sank.

A statement from the Maritime Affairs Directorate said 89 people, including crew members, were rescued, but five passengers were reported missing. Thirty-four of the rescued passengers were hospitalized for injuries.

Band?rma Governor Selahattin Hatipo?lu said some 20 military divers began searching for the missing early on Monday. The ferry lay around 20 to 30 meters (65 to 100 feet) under the surface, Hatipo?lu said.

Helicopters with night vision equipment were dispatched to Band?rma shortly after the accident to help rescue efforts throughout the night.

Poyraz also noted that rescue operations would continue, as required by procedures, for at least 72 hours. Poyraz said while authorities were trying to determine exactly how many passengers were on board the sunken ship, his department was working closely with the company that owned the ship.

In the meantime, some TIR truck drivers who were rescued from the accident blamed the ship's management company for the accident, saying that vehicles had been allowed to load onto the ship above and beyond the normal weight capacity of the vessel. The same drivers said the ship was tilting when it left the port and that it began to sink after sailing only about 500 meters.

Other drivers stated that the ferry sank because it began tilting after no vehicles were directed to the lower level as the elevator system was not working.

"The waves could have caused the trucks to move around," Hatipo?lu said. "But this will become clear after the investigation."

Meanwhile, Marmara N Denizcilik A.?., which owns the ferry, issued a statement yesterday explaining that the ship's load was under its capacity of 100 trucks and 5,273 tons.

"Our ferry had 75 vehicles and a total of 2,400 tons when it set sail," the statement said, adding that an investigation is being carried out by various authorities and the results will be made public upon its conclusion.

The statement also said the ship passed an inspection on Aug. 5 and that trucks on the ferry were mainly carrying vegetables, fruits, paper, water and raw minerals.

Currently only four of the injured remain in the hospital and three of them are ship personnel. Truck driver Özer Erdo?an, 41, was the accident's only casualty.

This news is a total 4382 time has been read