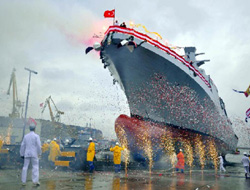 Turkey has completed the first prototype of a patrol and anti-submarine warship named Heybeliada as part of M?LGEM, the national ship project, marking its completion with a ceremony in ?stanbul's Pendik district.

Turkey has completed the first prototype of a patrol and anti-submarine warship named Heybeliada as part of M?LGEM, the national ship project, marking its completion with a ceremony in ?stanbul's Pendik district.

The first step to turn the long awaited M?LGEM project into reality was made in 2005 when the Undersecretariat for the Defense Industry (SSM), the civilian procurement agency for the military, issued a request for proposal for the acquisition of 12 corvettes -- small, maneuverable, lightly armed warships -- to be developed and designed locally, with foreign assistance to be kept to a minimum.

Prime Minister Recep Tayyip Erdo?an said on Saturday during the ceremony held for the first prototype that through the development of both civilian and military vessels, resources are kept in the country.

"We set our primary target as meeting the requirements of the Turkish Armed Forces [TSK] from within national industry and thus minimizing the TSK's dependence on other countries," Erdo?an said.

"Developments taking place on seas that Turkey borders demonstrate clearly the importance of naval power in the protection of Turkish national interests. Turkey's sovereignty rights in the Aegean, Black and eastern Mediterranean seas, as well as the straits, make up the main elements of the country's national security policy. We need local development of military ships to have a strong say on our seas," he added.

Minister of Defense Vecdi Gönül, taking the podium at the ceremony, stated that a total of 12 corvettes to be developed under M?LGEM are scheduled to be completed by the year 2028. Stealth technology has been used in the design of the Heybeliada.

The M?LGEM project stands as a turning point since it marks the first time that a warship in the corvette class has been designed by Turkish naval engineers, while both the software and hardware of the corvette's war management systems were also developed in the country. In addition, much of the equipment on the corvette was designed by domestic companies. Around 38 Turkish private sector companies worked on the production of the Heybeliada's sub-systems. The prototype cost close to $260 million to build.

The construction on Heybeliada began on July 26, 2005, and it will be put under comprehensive sea trials beginning on Oct. 25, 2010, before being officially commissioned. It is expected to enter service in 2011. Harpoon missiles as well as RAM PDMS air-guided missile defense systems are included among the weapons that will feature on the Heybeliada.

Meanwhile, Chief of General Staff Gen. ?lker Ba?bu? stated at the ceremony that through the M?LGEM project Turkey aims at obtaining naval power with a high level of deterrence that can operate uninterruptedly, even in the most difficult conditions, having the capability to defend against both symmetric and asymmetric threats. The project will also increase Turkey's effectiveness during the peacekeeping operations in which Ankara will participate under both the UN and NATO.

The key difference of M?LGEM from other military projects realized in Turkey is that for the first time the responsibility for the design and construction of a warship belongs to the Turkish Navy Forces Command, Gen. Ba?bu? said.

Adm. Metin Ataç, commander of the naval forces, stated that local materials have an 80 percent share in the M?LGEM project. Turkey has now entered the list of the top 15 countries in the world that can design a warship, he added.

"The idea of building a warship locally was perceived as crazy a long time ago. First it was necessary to dream up the project. In fact, that is what has happened. Over the years the project has faced many risks. There have been times when hopes faded over building a national warship. I would say that the early concept of M?LGEM first materialized during the struggle of the crazy Turks fighting the War of Liberation under very difficult conditions," Ataç said.

Technologies to reduce the ship's detectability by radar and infrared tracking systems are used in the design of the vessel to minimize vulnerability from weapons such as guided missiles and mines.

The naval forces have also been working on a prototype of a Vessel Integrated Warfare Management System and a C4I project known as Genesis under which it plans to set up a national software source code for the most advanced C2 systems of its surface combatants as well as submarines.

The C2 systems to be developed under Genesis will be applied in the M?LGEM project.

Turkish defense software company Havelsan is responsible for the development and integration of software and hardware for the Genesis project under a $97.5 million contract it signed with the SSM in November 2004.

This news is a total 2710 time has been read