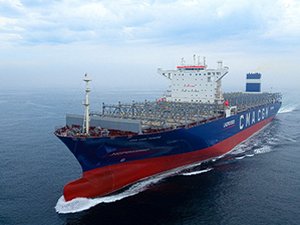 The milestone makes HHI the world’s first shipyard to construct an LNG-fueled very large container ship (VLCS), the company boasted in its statement on Monday.

The vessel, measuring 366 meters in length, 51 meters in width and 29.9 meters in depth, marks the world’s first VLCS operating on LNG.

The ship is equipped with a 12,000 cbm-class large LNG fuel tank. This enables the vessel enough fuel capacity for an Asia-Europe round trip on a single filling. The tank is composed of 9 per cent nickel steel which has superior strength and impact toughness even at cryogenic temperature (-163 °C), HHI said.

The ship marks the first in a series of six LNG-fueled ships of the same size and type that HSHI has been constructing over the past years after signing an agreement with EPS in April 2018, with the last delivery scheduled for the third quarter of 2022. “In a similar way that electric vehicles nowadays stand in the spotlight in the auto industry, eco-friendly vessels like LNG-fueled ships do in the shipbuilding industry,” said an official of HHI Group.

To date, HHI Group has won orders to build a total of 44 vessels operating on LNG, including bulk carriers, tankers and container ships.

This news is a total 1738 time has been read